Russian authorities should stop the unprecedented crackdown on freedoms of expression, assembly and association in the country 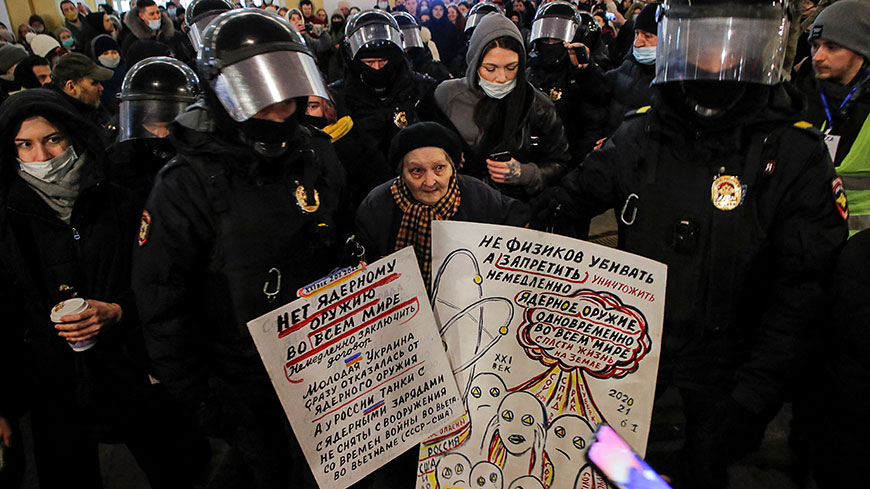 Yelena Osipova, an elderly artist and activist, is escorted to the police van during an anti-war protest, in Saint Petersburg, Russia on March 2, 2022. Credit: REUTERS/Stringer

Russia's military attack against Ukraine has lasted for almost 12 days now, causing death and destruction. It is also leading to a large-scale repression of freedoms in the Russian Federation.

Since the war began, more than 13 000 people, including children and elderly people, have been arrested in dozens of Russian cities for the exercise of their legitimate right to protest peacefully against it, with more than 5 000 individuals, including journalists and human rights defenders, like Oleg Orlov and Svetlana Gannushkina, arrested yesterday. Many reported police violence, forceful collection of personal data, intimidation and reprisals, including threats of criminal prosecution and dismissal from their places of work or study for expressing their opposition to the war.

Dozens of independent and foreign media outlets have been subjected to censorship by either being banned, blocked or forced to delete any information that does not come from official sources. While some media outlets decided to stop reporting about Russia’s military attack against Ukraine, others, including the independent TV channel “Dozhd” and the oldest Russian independent radio station “Echo of Moscow”, decided to stop broadcasting altogether.

The Russian parliament has rushed to adopt several draconian provisions criminalising the spread of “fake information” about the acts of the Russian army, its “discreditation”, and calls for public protests, with sanctions of up to 15 years in prison and hefty fines – leaving no space for free speech and opinion on the war.

Immediately after the adoption on 4 March of these legislative provisions, the law enforcement authorities started implementing them vigorously against ordinary people, activists, journalists, human rights defenders and civil society groups all over the country, sanctioning any form of disagreement with official discourse. Some human rights NGOs, like Memorial and Civil Assistance Committee, “Pskovskaya Gubernia” newspaper and a number of human rights defenders – who have spoken out against the war - have been subjected to unjustified raids and searches without respect for basic legal safeguards. This has a huge and continuous chilling effect on the human rights situation in the country, prompting hundreds of journalists, human rights defenders and civil society activists to seek refuge abroad.

The Russian authorities hold the key to stopping the suffering of millions of people that their attack on Ukraine has unleashed and I urged them to stop the war immediately. I also urge them to end the internal repression against human rights defenders, journalists, activists, and ordinary citizens who oppose the war and to fully respect their human rights including freedoms of expression, peaceful assembly and association in line with the international and European human rights obligations by which Russia is bound.