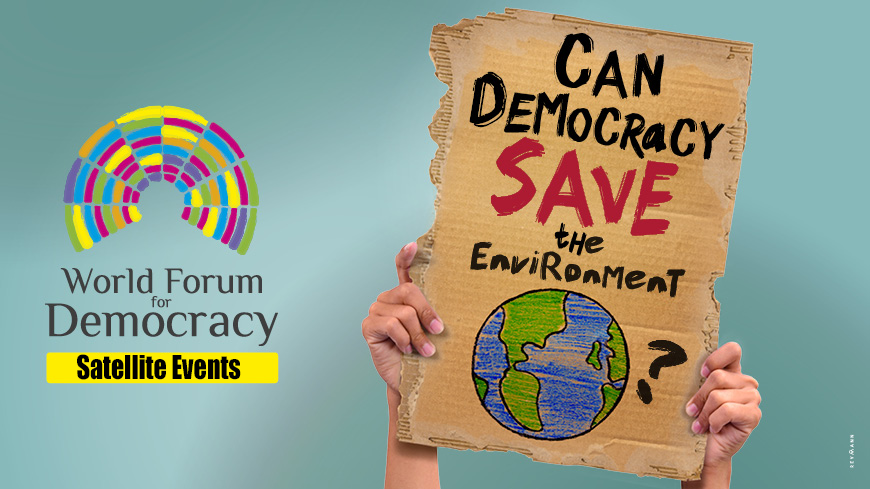 Since its first edition in 2012, the World Forum for Democracy has gained recognition as an arena for seminal discussions on issues of modern democracy. To reach out to a wider range of contributions and enrich the debate, the Forum encourages the organisation of satellite events by Council of Europe’s Schools of Political Studies, which have been instrumental to the WFD since its inception, universities renowned in the sphere of political studies and international relations, non-governmental organisations, municipalities and other institutions. This idea was successfully implemented in 2015, when four outstanding universities organised satellite events related to the Forum΄s topic.

The organising institutions are free to decide independently about the dates and format of the event, the speakers and the specific topic(s). The satellite events can take place any time during the year. Possible formats include seminars or a seminar series, lectures in schools, surveys, social media campaigns, hackathons, local implementation of innovation initiatives presented in previous Forums, radio/tv debates, or lightening talks with the public at large (at NGOs, schools, community centres, etc).

Democracy Talk “Can Democracy Save the Environment”

organised by the Visegrad School of Political Studie

Reinventing the concept of the Eco-state as the key priority

organised by the School of Democratic Leadership of Montenegro

Can civic participation and activism be the real answer to the environmental problems?

organised by the Ukrainian School of Political Studies

WFD Can Democracy save the environment? Satellite events in Greece

organised by the School of Political Studies of Greece

From the Chernobyl Disaster to New Nuclear Power Plant in Belarus. Return to Ecological Thinking

organised by the East-European School of Political Studies of Belarus

Can Democracy Save the Environment? The Case of Bulgaria.

Date to be confirmed

organised by the Bulgarian School of Politics

A glimpse into the horizon: migration and climate change

Environmental rights and climate change: the voices of minorities and indigenous peoples in Europe

Civil Society in Dialogue - Self and collective care: a strategy for movements and civic organisations working on democracy, environment and social change

organised by the Conference of INGOs of the Council of Europe

Webinar: How to commit to the climate in a cross-border region?

organised by the Council of Europe and the Grand Est Region in partnership with CRISTEEL - Europe Direct Lorraine Grand Est and the support of the IEE and the Club pour l'Unesco.

Webinar: The 15-Minute City: Lockdown Daydreaming or a Model for Sustainable Urban Living?

organised by the Council of Europe’s Democratic Governance Division

organised by the Expert Council on NGO Law