Founded in 2007, the Constanta metropolitan area is composed 14 localities situated at a maximum distance of 30 km from the city. The metropolitan area has a permanent population of 387,593 inhabitants and a minimum average of 120,000 transient people per day, including tourists and seasonal workers, during the high tourist season.

The most important ethnic group – people of Romanian origin – makes up 90% of the city’s inhabitants. The largest minority groups comprise people of Turkish (3.3%), Tatar (3.1%) and Roma (2.7%) origins. Greek, Bulgarian and Jewish groups were also recorded in the past. 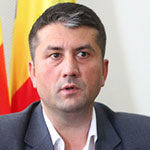