français
The President of the CPT, Alan Mitchell, met with Deputy Prime Minister and Minister of the Interior, Davor Božinović, in Strasbourg on Friday 4 February 2022, further to their previous meeting in October 2021 to continue their discussions on the treatment of migrants deprived of their liberty.
08/02/2022 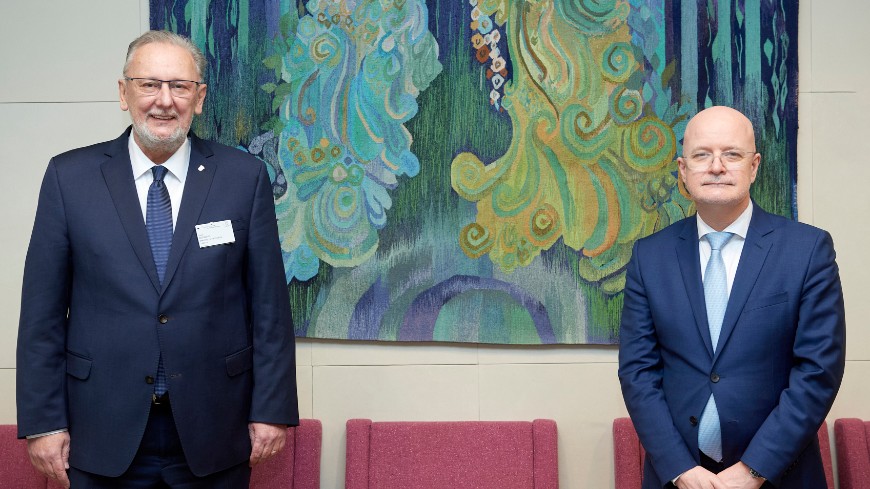 The talks focussed on the implementation of the recommendations contained in the CPT’s report on the 2020 ad hoc visit to Croatia, published on 3 December 2021. The CPT’s President reiterated the necessity for the Croatian authorities to maintain a constant vigilance to ensure that migrants intercepted by various units of the Croatian Police in the country are not subjected to treatment contrary to Article 3 of the European Convention on Human Rights. The Deputy Prime Minister recalled that every clear allegation of ill-treatment or excessive use of force by police officers would be investigated by the competent prosecutorial authority and police oversight mechanism. Mr Božinović also referred to the first semi-annual report of the Independent Border Monitoring Mechanism as evidence of Croatia’s commitment to guaranteeing proper oversight of police operations. Further, the Deputy Prime Minister authorised the publication of the Croatian authorities’ response to the recommendations of the CPT’s 2020 visit report to Croatia.

Going forward, both the CPT’s President and the Deputy Prime Minister agreed to continue their exchanges including on good practices for the operation of immigration detention facilities in Croatia, including the Ježevo Reception Centre.

The talks were also attended by Terezija Gras, Secretary of State of the Ministry of the Interior, Narcisa Bečirević, Deputy Permanent Representative of Croatia to the Council of Europe as well as by Régis Brillat, Executive Secretary of the CPT and Hugh Chetwynd Head of Division at the CPT’s Secretariat.

Note: CPT to carry out periodic visit to Croatia in 2022 (link)