Cultural Routes of the Council of Europe in Georgia 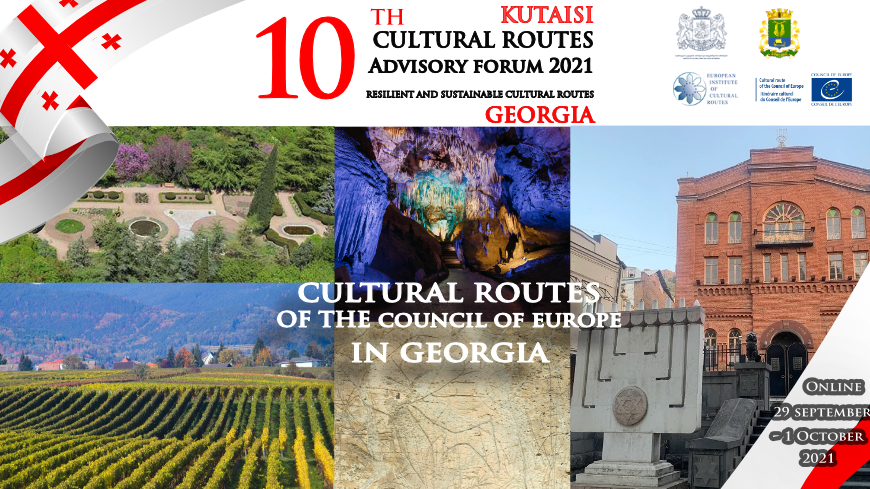 Georgia became a member State of the Enlarged Partial Agreement on Cultural Routes of the Council of Europe (EPA) in 2016 and is particularly active in promoting the programme. The country has established its own Board for Strategic Development and Certification of Cultural Routes of Georgia, an advisory body of the Ministry of Culture, Sport and Youth, to support the development of local Cultural Routes.

The 10th Annual Advisory Forum on Cultural Routes of the Council of Europe will take place online from 29 September until 1 October 2021. It is organised in cooperation with the Ministry of Culture, Sport and Youth of Georgia and the Kutaisi City Municipality.

The Jewish people are an integral part of European civilization. Over the millennia, they have made a significant contribution to the development of European culture. The Jewish Heritage Route of the Council of Europe, certified in 2004, reflects the fascinating history of Jews in Europe. Georgia joined the Route in 2017.

The Jewish Diaspora is one of the most ancient in Georgia. Jews came to Georgia after Nebuchadnezzar raided Jerusalem and destroyed the first temple in 586 BC. The Georgian-speaking Jewry is a community with the highest number of surviving Jewish heritages in the world. Nationwide, the Jewish cultural heritage includes synagogues, Jewish heritage monuments, museums, graves, and archaeological artifacts.

Winemaking and viticulture is an important part of the culture of Europe and the countries of the Mediterranean basin. Wine production has always been a symbol of European identity. In 2009, Iter Vitis became a Cultural Route of the Council of Europe. Georgia joined the Route in 2017.

The oldest trace of winemaking was found on the territory of Georgia, from where it spread throughout the world and had a major impact on the formation of agriculture and civilizations in general. In Georgia, wine was already produced some 8,000 years ago.

Prehistoric rock art is one of the most ancient forms of cultural heritage. Around 40% of the prehistoric rock art artifacts are concentrated on the European territory. The Prehistoric Rock Art Trails of the Council of Europe were certified in 2010. Georgia joined the network in 2018.

The Prehistoric Rock Art Heritage in Georgia is represented by the complex of Trialeti (Patara Khram) petroglyphs. The Trialeti petroglyphs are located in Kvemo Kartli, near the town of Tsalka. These petroglyphs appear in the form of small panel pictures on the rocks. They mostly represent the images of local fauna and hybrid animals. Among the geometrical images, square meshes, crosses and the shining sun are depicted.

The therapeutic use of hot springs has been prevalent throughout Europe since ancient times. The political and cultural circles traveling to Europe's spas were creating centers of cultural exchange. The European Route of Historic Thermal Towns was certified in 2010 and Georgia joined it in 2017.

The State Representative’s Administration in Imereti in Georgia is an associate member of the European Historic Thermal Towns Association. Rich in historic architecture, vineyards and hot mineral springs, Imereti is a region with a long history. As one of Georgia's most famous spa towns in this region, Tskaltubo is not only popular for the quality of its waters, but also for its beautiful built heritage, its green landscapes and its fascinating local caves.

Historic gardens have shaped European culture and identity throughout times. In different moments in history, the garden culture has been established and different plants, forms of parterres and cultivation habits have become a living proof of a common European culture. The European Route of Historic Gardens became a certified Cultural Route of the Council of Europe in 2020.