Who violates the electoral legislation, and why? 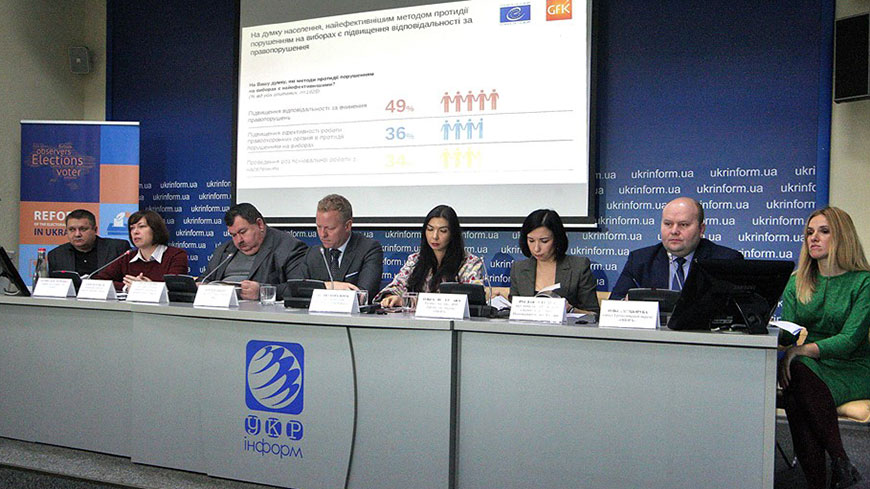 The results of an opinion poll on causes for electoral violations were presented today during a press conference in the National Agency of Ukraine “Ukrinform” to representatives of media and civil society in Ukraine.

The opinion poll was commissioned by the Council of Europe, within the framework of the Council of Europe project “Reform of the electoral practice in Ukraine to explore the reasons and motivation which lead the Ukrainian citizens to act against the electoral law. The results of the opinion poll, which was conducted in June – July 2017 in all regions of Ukraine (save the Autonomous Republic of Crimea and areas of Donetsk and Luhansk regions which are not under the control of the Ukrainian authorities), provides national authorities and civil society organizations with useful information and data, when planning and taking necessary measures to prevent electoral violations and to enhance the effectiveness of accountability mechanisms.

In the majority cases, Ukrainians do not realize the seriousness of consequences of election violations:  respondents who have witnessed at least one violation were asked whether these situations significantly influenced the election results in their settlement – and only 19% confirmed this.

68% of Ukrainians faced at least one type of election violations since 2014: violations relating to election campaigning (named by 65%) and to vote buying (named by 13%) are the most prevalent types of violation. As vote buying is one of the key problems in the electoral process in Ukraine, which needs to be tackled by an electoral reform, the present opinion poll focused on the question, why somebody would sell his or her vote.

Only 14% of Ukrainians know about criminal liability for voters who sell their votes, and only 18% of Ukrainians have heard about cases of bringing those to justice who violated election law.

Overall, 79% of Ukrainians deny readiness of all their households’ members to sell votes, while 6% confirmed their personal readiness to sell their vote. In reality, the latter percentage could be significantly higher because of the sensitivity of the question and because of the fact that vote buying often happens indirect: offering of food packages by candidates the majority of Ukrainians do not condemn.

Summarizing the results of all survey components, the main reasons for vote-selling by Ukrainian citizens are the following: 1) poverty; 2)  attempts to gain at least some benefits from a candidate or a party as a result of disappointment 3) lack of awareness of what is considered as vote buying; 4) lack of public condemnation of vote buying and vote selling; 5) low awareness about criminal responsibility for vote selling; 6) lack of awareness of cases, where those were brought to justice who violated election law and 7) low readiness to report about election violations, especially in case of indirect vote buying.

Links to information about press conference (only in Ukrainian):