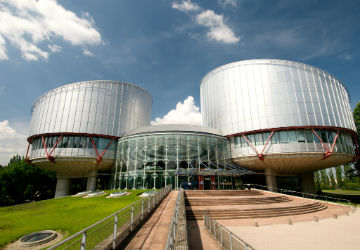 The European Court of Human Rights was set up under the European Convention on Human Rights as amended by Protocol No. 11. It is composed of a number of judges equal to that of the Member States (currently forty-six).                                       The procedure before the European Court of Human Rights is adversarial and public. Hearings, which are held only in a minority of cases, are public, unless the Chamber/Grand Chamber decides otherwise on account of exceptional circumstances. Memorials and other documents filed with the Court's Registry by the parties are, in principle, accessible to the public. Individual applicants may submit applications themselves, but legal representation is recommended, and even required for hearings or once an application has been declared admissible. The Council of Europe has set up a legal aid scheme for applicants who do not have sufficient means. The official languages of the Court are English and French, but applications may be submitted in one of the official languages of the member states. Once the application has been declared admissible, one of the Court's official languages must be used, unless the President of the Chamber/Grand Chamber authorises the continued use of the language of the  application. Any member state or individual claiming to be a victim of a violation of the Convention may lodge directly with the Court in Strasbourg an application alleging a breach by a member state of one of the rights foreseen by the Convention.

Judges are elected by the Parliamentary Assembly of the Council of Europe for a six-year term. The Plenary Court elects its President, two Vice-Presidents and two Presidents of Section for a period of three years.

Under the Rules of Court, the Court is divided into four Sections, the composition of which, fixed for three years, is geographically and gender balanced and takes account of the different legal systems of the member states. Two of the Sections are presided over by the Vice-Presidents of the Court; the other two Sections are presided over by the Section Presidents. Section Presidents are assisted and where necessary replaced by Section Vice-Presidents, elected by the Sections.

Committees of three judges are set up within each Section for twelve-month periods. Chambers of seven members are constituted within each Section on the basis of rotation, with the Section President and the judge elected in respect of the State concerned sitting in each case. Where the latter is not a member of the Section, he or she sits as an ex officio member of the Chamber. The Grand Chamber of the Court is composed of seventeen judges, who include, as ex officio members, the President, Vice-Presidents and Section Presidents.

Key dates of the Court

- Creation of the Council of Europe

4 November 1950 - Adoption of the Convention

3 September 1953 - Entry into force of the Convention

1 November 1998 - Entry into force of Protocol No. 11 to the Convention, instituting "the new Court"

1 June 2010 - Entry into force of the Protocol No. 14, whose aim is to guarantee the long-term efficiency of the Court

How the Court Works

Article 25 of the European Convention on Human Rights provides that: “The Court shall have a registry, the functions and organisation of which shall be laid down in the Rules of Court.”

See how to make a valid application

Chambers decide by a majority vote. Any judge who has taken part in the consideration of the case is entitled to append to the judgment a separate opinion, either concurring or dissenting, or a bare statement of dissent.

Judgements and Decisions of the ECtHR v. Armenia

The Court in brief brochure is an introduction to the Court and the key dates in its history. It gives a short summary of the Convention and its guarantees and prohibitions.