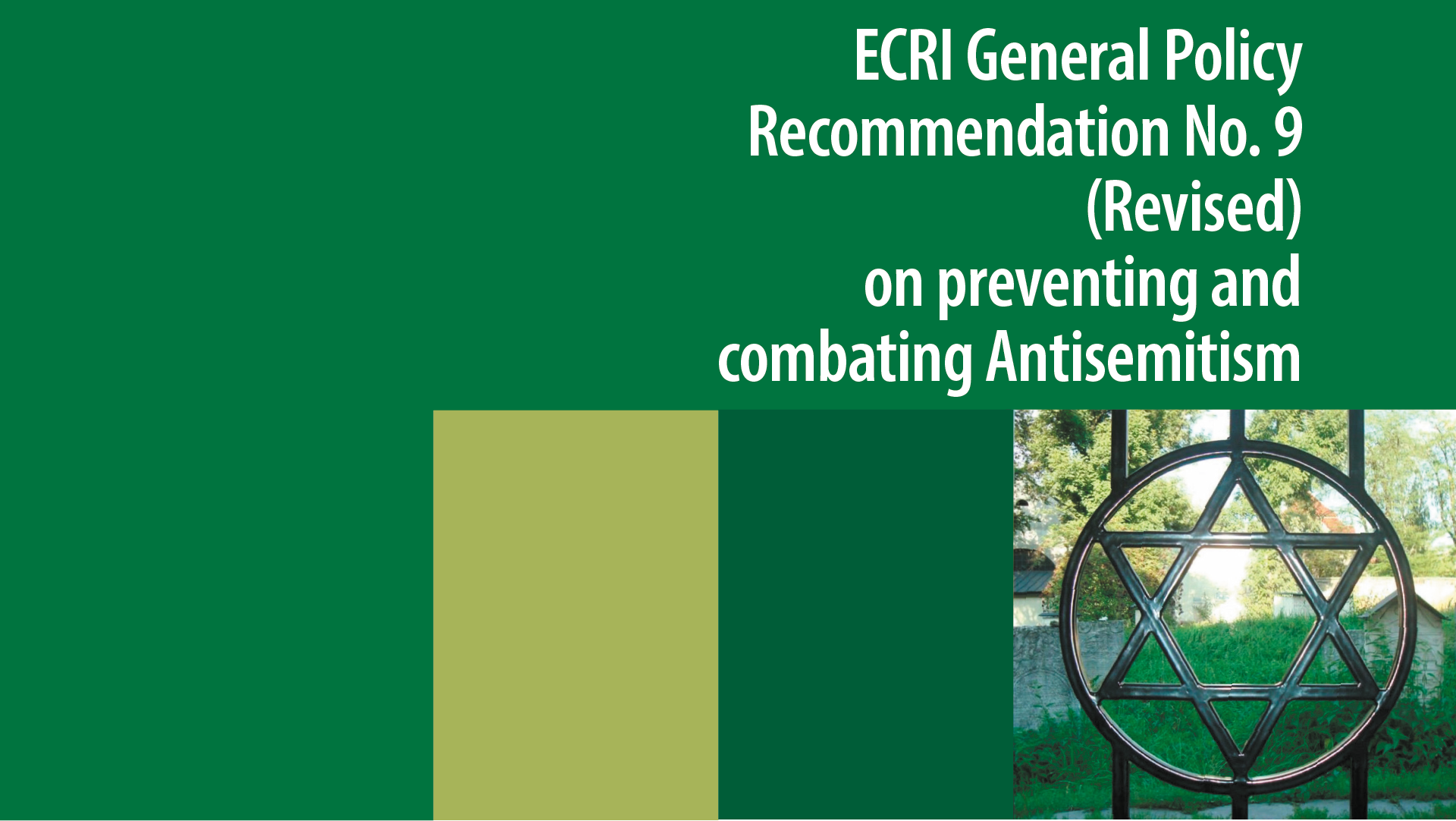 The Council of Europe’s expert body on racism and intolerance (ECRI) has today published an updated General Policy Recommendation on preventing and combating antisemitism, to help prevent increasing antisemitism and attacks on Jews in many parts of Europe.

Ahead of publication, Council of Europe Secretary General Marija Pejčinović Burić said: “Antisemitic attacks – including in schools, vandalism of synagogues and the spread of antisemitic hatred online – are on the rise. This is a dangerous trend and European governments should join forces to counter such extremism in all its forms”.

ECRI Chair Maria Daniella Marouda said: “ECRI strongly emphasises the role of education, including education about the Holocaust, in promoting tolerance and respect for human rights, and thus also in the struggle against antisemitism.”

Noting that antisemitic acts are committed by a wide range of perpetrators, including neo-Nazis, political and religious extremists, ECRI’s Recommendation provides comprehensive guidance to governments on how to combat antisemitism in four specific areas:

•          Protection of Jews, Jewish communities and their institutions;

Regarding protective measures, the Recommendation suggests that governments should ensure the protection of Jews, Jewish communities and their institutions by promoting their cooperation with local and national law enforcement and security authorities. ECRI also proposes improving co-operation with Jewish communities in order to determine and implement necessary security measures and ensure financial support.

Whenever tensions rise in the wake of any renewed violence in the Middle East, sweeping generalisations about all Jews and antisemitic violence also rise in Europe. ECRI points out that, all too often, insufficient emphasis is placed on the need to distinguish between legitimate criticism of the actions of Israel, to the extent that it is held to the same standards as any other state, and the public expression of racism and hatred against Jewish people in general.

In the field of prosecution and law enforcement, ECRI recommends that “antisemitic crimes committed online are punished just as crimes offline and are adequately addressed by means of effective prosecution and other measures. Illegal antisemitic hate speech must be removed promptly and consistently by internet service providers, in accordance with the relevant legal and non-legal framework.”

ECRI’s first General Policy Recommendation on the fight against antisemitism was published in 2004. In preparing the present revised Recommendation, ECRI consulted a wide range of partners including Jewish organisations, academics, national coordinators and representatives of the United Nations, the OSCE and the European Union, as well as the Council of Europe Secretary General’s Special Representative on antisemitic, anti-Muslim and other forms of religious intolerance and hate crimes.