Regional conference in Montenegro on the execution of ECHR judgments 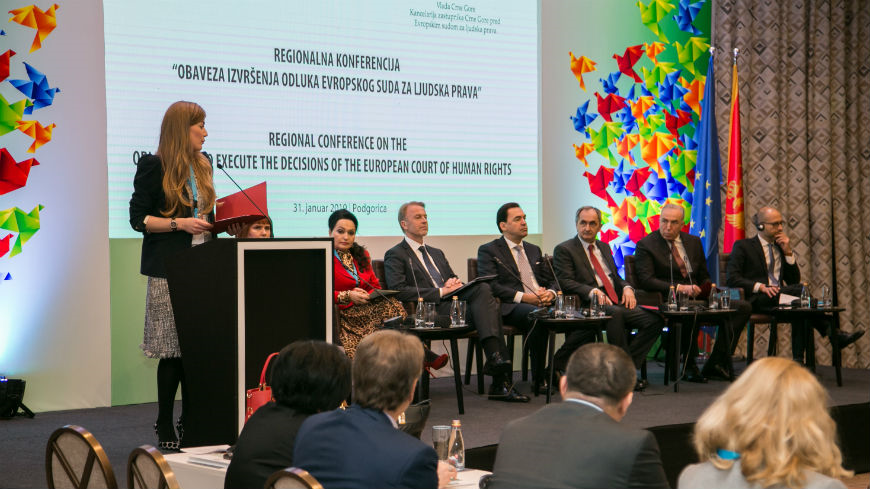 On 31 January the first regional conference on “the obligation to execute decisions of the European Court of Human Rights” was held in Podgorica, Montenegro.

The conference was opened by the Deputy Prime Minister and Minister of Justice of Montenegro Mr Zoran Pazin and gathered high-level representatives from Bosnia and Herzegovina, Croatia, Montenegro, Serbia and “the former Yugoslav Republic of Macedonia”, including presidents of constitutional and supreme courts, prosecutors general and government agents.

The keynote speech given by the representative of the Execution Department highlighted the positive results achieved so far by Western Balkan countries and the important role played by government agents in the execution process. During the conference over 120 participants exchanged about their experiences and the major remaining challenges to ensure full and effective execution of the Strasbourg Court’s judgments. The conference highlighted the obligation of the national authorities, including the judiciary and prosecutors, to take concrete steps to give effect to the Court’s judgments and the usefulness of regional co-operation and interaction notably by sharing good practices in this domain.

Programme of the conference

Interviews in local language: "Montenegro can play a role model", "Citizens are frequently complaining to Strasbourg", "Pažin: European Court of Human Rights is the conscience of Europe united in diversity"

Factsheets for Montenegro, Croatia, Serbia, Bosnia and Herzegovina and "the former Yugoslav Republic of Macedonia"