Congress Secretary General reports on activities to the Committee of Ministers 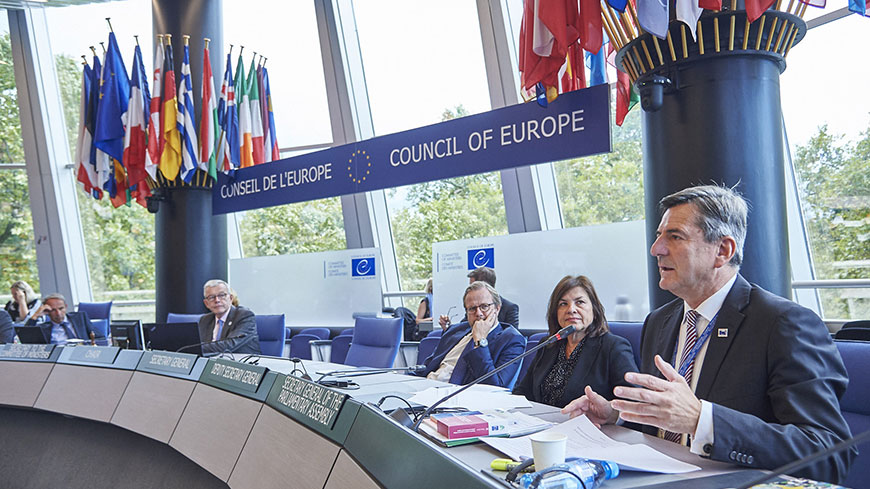 On 27 September 2022, Andreas Kiefer presented the activities of the Congress since his last communication to the Committee of Ministers in March. He underlined in particular the agenda of the forthcoming Congress session in October 2022, which includes among others debates on the future of the Council of Europe, on the impact of hate speech and fake news on working conditions of local and regional elected representatives, on human rights and the environment and on the reception of women and children refugees. He recalled the continued support provided by the Congress to local authorities in Ukraine and its reconstruction and reiterated the Congress’ denunciation of the abduction of mayors and the holding of so-called referendum in the areas occupied by the Russian troops.

Mr Kiefer gave an overview of the developments of the Congress over the last twelve years of his mandate. He stressed that the profile of the Congress as an institution based on a Statutory Resolution of the Committee of Ministers had been raised and further developed by comprehensive self-chosen reforms. He thanked the representatives of the member States for supporting and accompanying the work, mission and adjustments implemented by the Congress, recalling that the allocation of sufficient budgetary and human resources was the condition for the Congress to fulfil its tasks.

Concerning the reflection on the future of the Council of Europe currently under way, he said “stable institutions, which are able to deliver, economies of scale and relevance through meaningful impact should be the guiding principles to the upcoming reform process in the run-up to a possible fourth Summit of the Council of Europe” underlining that the Congress and its network of members would actively contribute to this process.

The Congress Secretary General communication to the Deputies takes place twice per year as part of the dialogue that the Congress has developed with the Committee of Ministers.