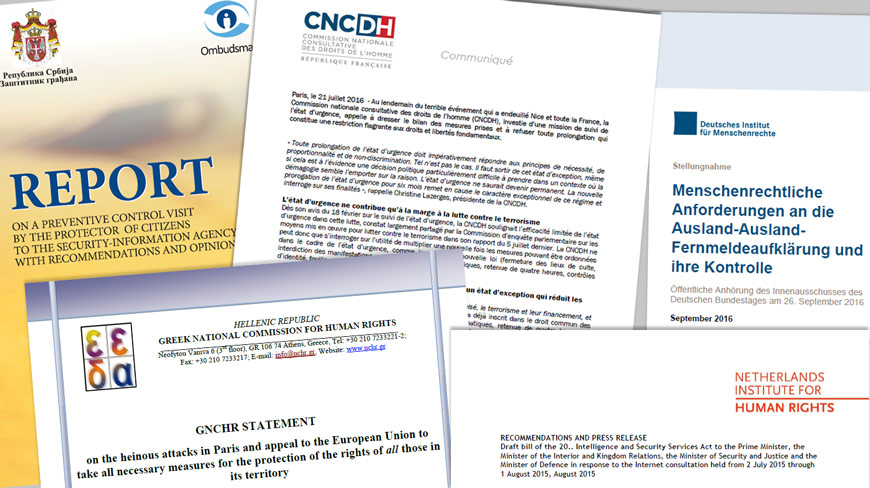 A series of terrorist attacks has deeply traumatised Europe. In Brussels, Paris, Copenhagen, Ankara and beyond, shock was followed by fear of further attacks and a sense of urgency about preventing them. Preventing and combating terrorism is a clear duty of all states, which must respect and protect every one’s life and security. However, states’ duty to prevent and combat terrorism should in no way be fulfilled at the expense of human rights standards and the common values in which European societies are grounded. This would be a mistake, since laws and policies that are human rights compliant preserve the values the terrorists are trying to destroy, weaken the pull of radicalisation, and strengthen the public’s confidence in the rule of law and democratic institutions.

In this context, national human rights structures (NHRSs) have a vital role to play. Because of their nature, competencies and experience, as well as the respect and confidence they command, NHRSs constitute the interface between national authorities and the public and are able to help both in keeping a cool head and efficiently combating terrorism without giving in to fear or undermining human rights.

Promotion of human rights standards and awareness-raising are very important in the aftermath of terrorist attacks. In a context in which some are willing to forfeit human rights for the sake of presumed security, NHRSs have the possibility and the duty to be vocal and to stress that there cannot be security without human rights, the protection of which is part of the solution rather than of the problem.

Press interventions, public events, online campaigns and other means of communication are important in this context. For example, the French National Consultative Human Rights Commission (CNCDH)   organised a conference last February entitled “Terrorism: permanent state of emergency?”, and the German Institute for Human Rights hosted a symposium last May on the oversight of the German Federal Intelligence Service (BND). As stressed by the European Commission against Racism and Intolerance in its General Policy Recommendation No. 8, counter-narratives developed by NHRSs can highlight the need to avoid pernicious stereotyping and to combat racism and intolerance while fighting terrorism. The Greek National Commission for Human Rights did exactly this in a statement of 23 November 2015.

NHRSs are also particularly well-placed to raise awareness among youth, who are particularly targeted by terrorist recruiters. As underlined by the United Nations High Commissioner for Human Rights in his July 2016 Report on how protecting and promoting human rights contribute to preventing and countering violent extremism, “programmes involving youth should feature prominently in efforts to prevent and counter terrorism” and national human rights structures can play “a central role in developing human rights education and training tailored to youth”.

The advisory role of NHRSs allows them to use their valuable expertise in order to carry out in-depth human rights impact assessments of draft counter-terrorism laws and policies. Among the most common shortcomings pointed out in NHRSs’ opinions and recommendation are inadequate respect for the principles of legal certainty and legality in broadly worded draft laws, imprecise definitions of terrorism and terrorism-related offenses, and the lack of solid human rights safeguards such as access to effective remedies and oversight. Good examples of work in this field include the French CNCDH opinion of 17 March 2016 on the draft law on fighting organised crime and terrorism, or the Austrian Ombudsman Board’s position of 11 May 2015 on the draft law on state’s protection. In addition to legal advice, NHRSs can also provide practical guidance to national authorities, as the Danish Institute for Human Rights did in a 2012 paper on counter-terrorism and human rights.

These inputs by NHRSs are taken into account by governments. For example, this year, in the context of a public consultation launched by the Dutch government on the draft bill on the Intelligence and Security Services Act, the Netherlands Institute for Human Rights issued recommendations according to which prior consent of untargeted interception of telecommunications and other means of data transfer should be given by a court or an independent organisation rather than by the minister as provided for in the initial draft law. As a consequence of this public consultation, the government decided to add provisions setting up a new Review Board for reviewing the lawfulness of authorisations prior to the actual exercise of special powers.

International institutions may also benefit from the expertise of NHRSs. For instance, in the context of the supervision by the Council of Europe Committee of Ministers of the execution by the UK of the Strasbourg  Court judgments in the McKerr group of cases, the Northern Ireland Human Rights Commission assessed the ‘package of measures’ presented by the UK government after it was found in breach of the European Convention on Human Rights due to failure to conduct effective investigations into the circumstances of deaths in the context of security force operations in Northern Ireland.

Many NHRSs, especially ombudsmen, are entitled to receive individual complaints, part of which may concern the implementation of counter-terrorism measures. This is, for example, the case in France, where the ‘Defender of Rights’ has dealt with more than 80 complaints directly or indirectly related to the state of emergency since its entry into force in November 2015.

Furthermore, NHRSs report on the protection of human rights, including in the context of the fight against terrorism, to national authorities as well as to international human rights bodies, such as the Committee Against Torture or the Human Rights Committee of the United Nations, which contributes to enhanced scrutiny of counter-terrorism measures.

NHRSs may also have oversight competences of specific and particularly sensitive counter-terrorism-related activities, such as the Serbian ‘Protector of Citizens’, who constitutes a unique example in Europe. He investigates complaints relating to security services, takes a proactive role in launching own-initiative investigations of security service activity and has successfully challenged security service laws before the national constitutional court. Other NHRSs are tasked with overseeing counter-terrorism activities conducted in specific circumstances, such as the state of emergency, in the context of which the French ‘Defender of Rights’ and the CNCDH cooperate with the parliament’s mechanism overseeing the implementation of the state of emergency.

In a context in which administrative counter-terrorism measures are on the rise and the judiciary is often bypassed, these different forms of oversight operated by NHRSs are extremely valuable.

The need to enhance NHRSs’ role in the fight against terrorism

Despite this long, although not exhaustive, list of activities conducted by NHRS there is room and need for improvement. The diversity of domestic backgrounds, levels of exposure to the terrorist threat, as well as of mandates and resources, has led to different levels of NHRSs’ involvement in this field. Their crucial added value requires making sure that they have all means necessary for performing their role.

The responsibility lies primarily with states, which should enlarge, when necessary, the mandate of NHRSs to allow them to perform the abovementioned activities, allocate sufficient financial and human resources, and fully respect the independence of these structures.

States should also renounce discussing and adopting counter-terrorism measures in a hasty manner and take sufficient time to consult with NHRSs. As mentioned in my recent memorandum on the human rights implications of the measures taken under the state of emergency in Turkey, states derogating from the European Convention on Human Rights in emergency situations should involve NHRSs, as they are are best placed to assess the proportionality of the measures taken in this context. Also, their participation in the monitoring process of these derogations would significantly contribute to establishing checks and balances to avoid arbitrariness and human rights violations.

As for NHRSs themselves, they would benefit from increased contacts with specialised bodies, such as national security service oversight bodies and expert bodies such as the UK Independent Reviewer of Terrorism Legislation. Enhancing cooperation between NHRSs is also essential in order to share experiences and good practices, show support to the most exposed, and build capacities. To this end, they can benefit from the support of various well-established networks, including the European Network of National Human Rights Intuitions (ENNHRI), the Global Alliance of National Human Rights Institutions (GANHRI, previously known as International Coordinating Committee of NHRIs), the European Network of Equality Bodies, and the International Ombudsman Institute.

NHRSs can also count on the Council of Europe’s aid and support. The Guidelines of the Committee of Ministers on human rights and the fight against terrorism, the case-law of the European Court of Human Rights as well as my work in this field are useful tools available to NHRSs in order to fulfil their vital role in protecting human rights while countering terrorism.