A Youth Peace Camp, bringing together young people from conflict-affected regions
at the European Youth Centre 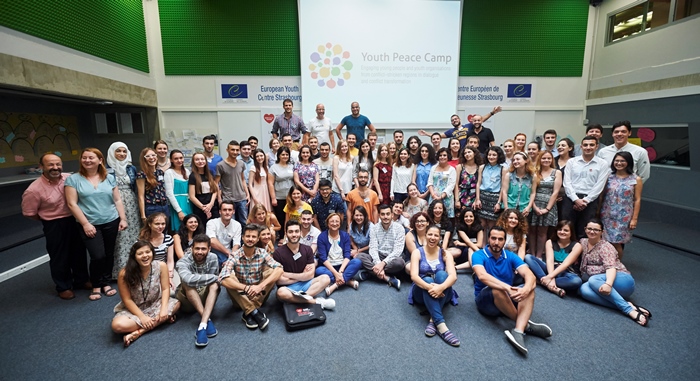 The Youth Peace Camp 2016 was held from 10 to 18 July at the European Youth Centre of Strasbourg. The project gathered 52 young people from the following areas:

The activity was organised in parallel to a Seminar on Social inclusion of refugee students and their role in intercultural dialogue with which it shared common programme elements.

Human rights education, conflict transformation and intercultural dialogue remain at the core of the Youth Peace Camp methodology, and its programme was divided into two blocks.

The first one aimed to build the group and elicit trust amongst participants as prerequisite to start exploring concepts related to conflict such as personal and social identities, conflict dynamics or violence. It culminated with one day spent sharing how conflicts affected the lives of participants as young individuals.

The second block of the programme was designed to explore various responses to challenges related to conflict and how young people can act as peacebuilders in their own communities. In the final part of the activity, participants developed follow-up project ideas.

* All reference to Kosovo, whether to the territory, institutions or population, in this text shall be understood in full compliance with the United Nations Security Council Resolution 1244 and without prejudice to the status of Kosovo.