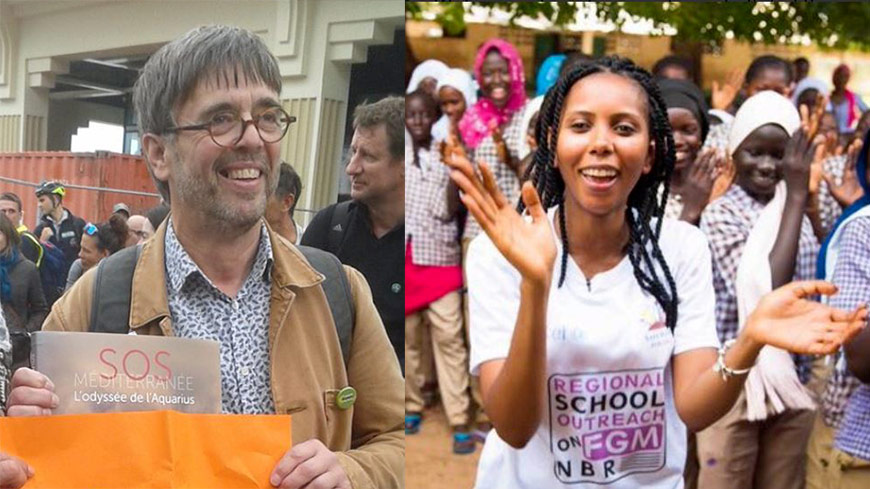 Jaha Mapenzi Dukureh, founder and CEO of the Non-Governmental organisation “Safe Hands for Girls”, and Damien Carême, Mayor of Grande-Synthe, are the laureates of the North-South Prize of the Council of Europe 2018.

Through “Safe Hands for Girls”, Jaha Dukureh provides support to African women and girls who survive Female Genital Mutilation (FGM) and addresses its lifelong, harmful physical and psychological consequences. Alongside women’s organisations and civil society, she contributed to the Gambian Government’s ban on FGM after youth mobilisation and campaigning in the country.

Born in The Gambia in 1989, Ms Dukureh is a survivor of FGM and was forced into child marriage at the age of 15. Her life story was captured in a 2017 documentary, Jaha’s Promise, about a brave woman whose ultimate vision is to ensure that FGM and child marriage become horrors of the past.

In February 2018, UN Women appointed Ms Dukureh as the first Regional Goodwill Ambassador for Africa. In 2016, Time Magazine named her one of the 100 most influential people.

Damien Carême, a French politician, is the Mayor of Grande-Synthe, in the outskirts of Dunkirk. He is a strong promoter of social equality and ecology, being responsible for the creation of “communal gardens” and the introduction of 100% of biological products in school canteens, among other measures. In 2010, Grande-Synthe was elected “capital of biodiversity” and received the "Fleur d'Or", "Ville Zéro Phyto", and the "Citizen Energy” awards.

Mr. Carême also is known as the “mayor of migrants” for the strong stand he took in favour of refugees throughout his mandate. In 2017, he led the construction of a humanitarian camp which provides shelter for thousands of migrants whose freedom of movement was suspended at the French-UK border. The camp, built without financial support from the State and in compliance with the norms of the United Nations, has the capacity to accommodate 2,500 people.

In 2016, he was a finalist of the "Best Mayor of the World" competition, an honorary title awarded by the City Mayors Foundation. He was also President of the Association of Mayors Villes & Banlieues de France (AMVBF) between 2014 and 2015.

With this award, the jury of the North-South Prize has chosen to honour these two outstanding citizens for their extraordinary achievements of and personal commitment in promoting North-South solidarity and human rights.