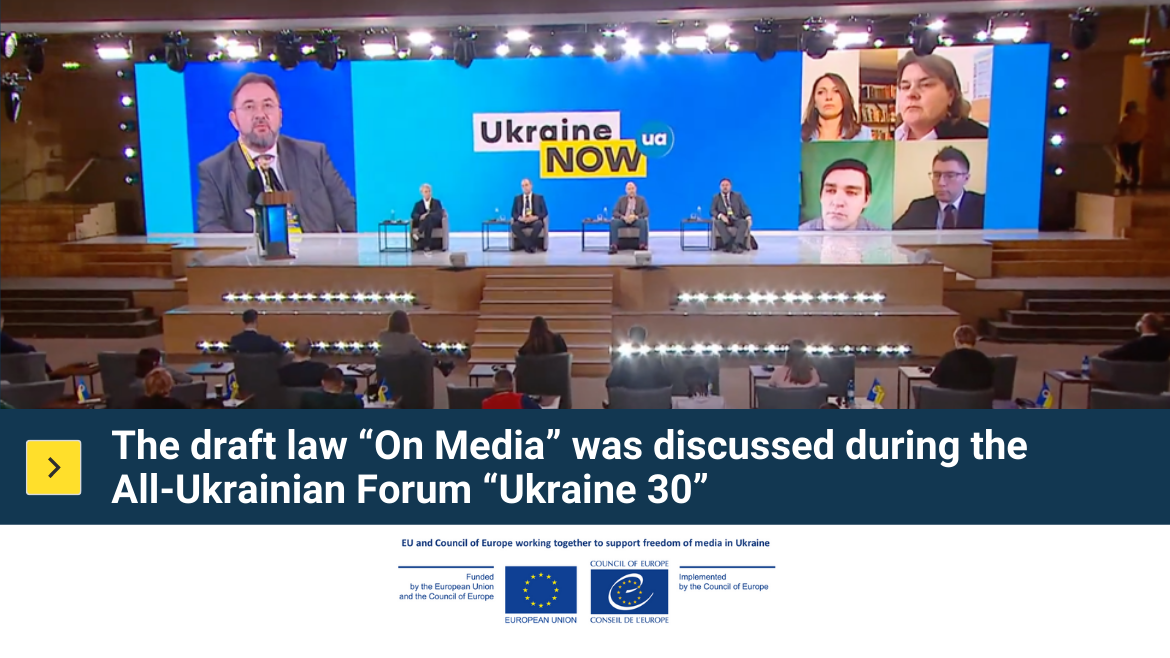 March 9, 2021, during the first day of the All-Ukrainian Forum “Ukraine 30. Culture. Media. Tourism”, the draft law “On Media” was discussed, which is designed to update the Ukrainian media legislation in accordance with the requirements of the time and European standards.

Speakers commented on the adoption of a modern and comprehensive bill that will help establish clear rules for traditional and online media, provide additional guarantees for the independent functioning of the National Council on Television and Radio Broadcasting, and help strengthen Ukraine's information security. According to Nikita Poturaev, Chairman of the Verkhovna Rada Committee on Humanitarian and Information Policy, the draft law on media is currently being agreed upon by all stakeholders, and its consideration in the first reading is scheduled for late spring 2021.

“Under the Association Agreement between Ukraine and the EU, Ukraine has committed itself to bringing media legislation to a key standard - the Audiovisual Media Services Directive - within 2 years of the entry into force of the Agreement. This process was to end by September 1, 2019, and therefore there are already some backlogs. Also, the adoption of a new law on media is one of Ukraine's commitments to the Council of Europe since 2005, when the Parliamentary Assembly of the Council of Europe called on Ukraine to ensure that the new version of the law on television and radio meets Council of Europe standards,” said Olena Lytvynenko, Deputy Head of the Council of Europe Office in Ukraine.

More information is available in Ukrainian.