State Secretary at the Ministry of Foreign Affairs, Republic of Slovenia 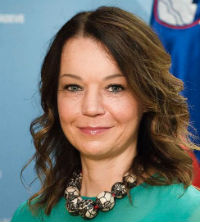 On 13 September 2018, at the constitutive session of the 13th Slovenian Government, Simona Leskovar was appointed State Secretary at the Ministry of Foreign Affairs.

Simona Leskovar was Ambassador of Slovenia to Japan and non-resident Ambassador to the Republic of Korea since October 2015. Before her posting in Tokyo, she was Head of State Secretary's office at the Ministry of Foreign Affairs and Director of the Young Bled Strategic Forum 2015. In August 2013, she was appointed by Slovenian Government as national Responsibility-to-Protect focal point.

Between November 2008 and November 2012, Ms Leskovar was Deputy Permanent Representative at the Permanent Mission of Slovenia to the United Nations in New York.

From 2006 to 2008, she held the position of Minister Counsellor in the Cabinet of the Foreign Minister; she was responsible for the preparation and Slovenian presidency of the General Affairs and External Relations Council. Between 2005 and 2006, she was adviser to the State Secretary. From 2001 to 2004, she served as third secretary at the Embassy of the Republic of Slovenia in Washington.

Simona Leskovar is a career diplomat with more than twenty years of service in Slovenian diplomacy. She studied international relations at the Faculty of Social Sciences, University of Ljubljana, and at the Netherlands Institute of International Relations Clingendael in The Hague.

State Secretary Leskovar was born in 1973.