Second African Forum on cybercrime: creating synergies for a coordinated approach to protect societies from the threat of cybercrime 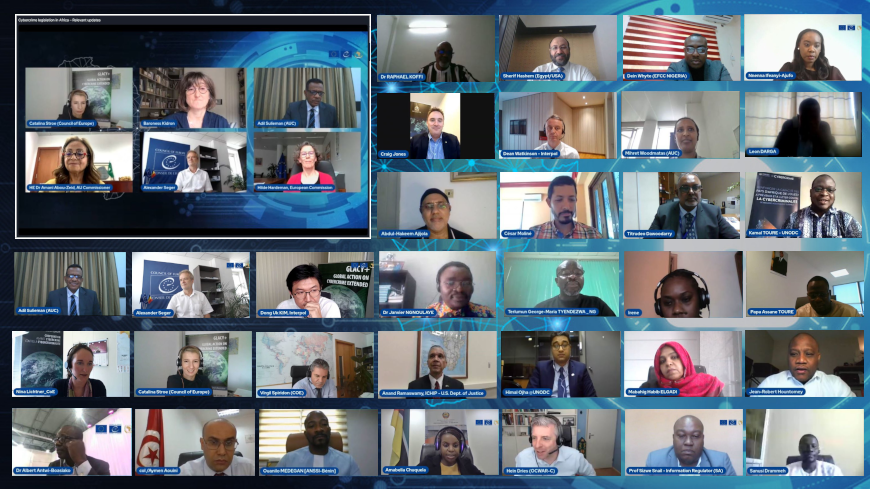 Following the success of the First African Forum on cybercrime, the African Union Commission, the European Union and the Council of Europe (GLACY+ and Octopus Project), in partnership with other international Organisations, hosted the Second continent-wide African Forum on Cybercrime.

The event took place online between 28-29 June 2021, bringing together more than 300 delegates from across the continent on each day – policy makers and legislators, representatives from the criminal justice sector (prosecutors, judges, law enforcement), delegates from ministries responsible for the implementation of cybercrime and cybersecurity policies, and other national and international stakeholders with an active role in the cybercrime domain.

In his opening remark, Alexander SEGER, Head of the Cybercrime Division of the Council of Europe, noted that “31 states [on the African Continent] are now in line with the Budapest Convention and a considerable growth in the last 18 months has been observed. Progresses have been made related to cybercrime and international cooperation. Recommendations relating to capacity building and sharing of experience have been agreed upon in April, and there is a broad agreement on capacity building worldwide.”

Baroness Beeban Tania KIDRON, Member of the House of Lords, Parliament of the United Kingdom, emphasized the need for considering children’s rights when discussing cybercrime regulation, with the African digital ecosystem recording a higher proportion of children on the Internet, thus making children safety an essential component of the discussions.

H.E. Amani ABOU-ZEID, Commissioner I&E, African Union Commission, highlighted that “by 2022, 60% of GDP will be digitalized, and it is underlined that this process has a strategic impact on every industry and ecosystem. It is timely that Africa’s Digital Transformation Strategy was adopted by the African Union Commission last year. With the increasing threat of cyber criminality in every aspect, it is evident that it should absolutely be at the heart of the discussion.”

Abdul-Hakeem AJIJOLA, Chair of the African Union Cybersecurity Expert Group (AUCSEG), brought forward the concept of trust, which “is at the core of a digital environment, and therefore requires the expanse of the rule of law in the cyberspace. Looking at updating national legislation, legislators and leaders have to base it on democratic values, while cybercrime investigators need to learn and adapt, a tremendously important aspect given the actual challenges faced by African authorities. The goal is to prevent cyber impunity and ensure cyber regulation across the region.”

These opening remarks paved the way for discussions during the Second African Forum focusing on progress made and reforms undertaken by African countries using the Malabo Convention and the Budapest Convention as guidelines, collaboration, assistance and capacity building support offered by international Organisations, importance of stakeholders’ involvement in policy and legislation drafting, as well as challenges and lessons learnt.

Ensuring collaboration at all stages and international cooperation in the long term was mentioned as a reliable resource and sustainability good practice. Given that cybercrime is a transnational and a transversal issue, having a global and multilateral perspective is an imperative approach to ensure adequate and efficient criminal justice in cyberspace.

Furthermore, the need for awareness raising at civil and political level, as well as the need for further and continuous coordinated capacity building have been discussed, capitalizing on the Forum bringing together under the same virtual roof the broad range of expertise and visions, of stakeholders promoting synergy through legislation, but also with building capabilities through workshops on legislation and training activities for law enforcement and judiciary.

The Second Additional Protocol to the Budapest Convention was mentioned as a future instrument to bring both operational, and policy value, among which the creation of effective legal basis for cooperation mechanisms, new tools (videoconferencing) and safeguards, that will ensure the Budapest Conference remains relevant.

Reiterating that States have a positive obligation to protect societies not only from cybercrime, but from every other type of crime as they are likely to involve electronic evidence, while also safeguarding and upholding human rights and the rule of law, the Forum concluded with one main idea, that we still need to put this kind of topic on our agenda, to streamline these events and make possible for the audience to connect, share experiences and collaborate.

The Forum was complemented by a parallel hub hosted by the Council of Europe and regional hubs hosted by INTERPOL.

Key messages will be shared shortly on the event dedicated webpage.