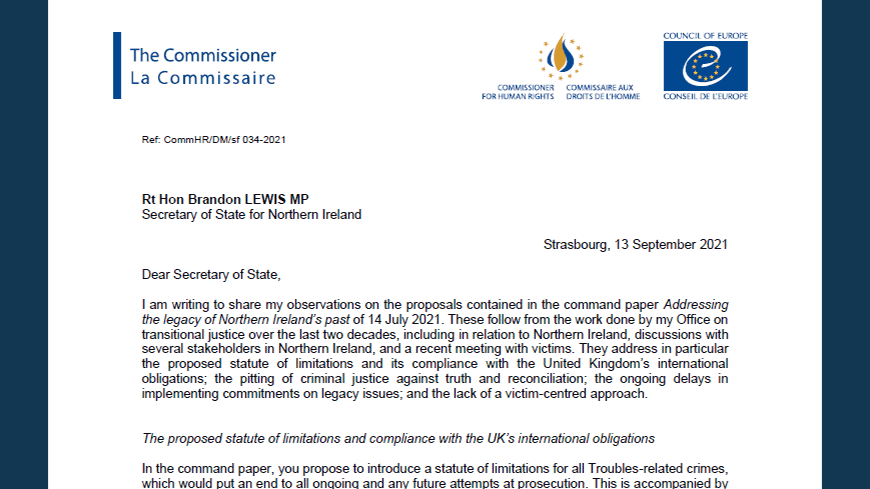 In a letter to the Secretary of State for Northern Ireland published today, the Council of Europe Commissioner for Human Rights, Dunja Mijatović, warns that a proposed new plan for dealing with the legacy of the Troubles in Northern Ireland “would undermine human rights protections and would cut off avenues to justice for victims and their families”. If adopted, the plan would lead to impunity and cannot be the foundation on which transitional justice is built. Instead, the UK government should focus on “delivering justice across all communities without further delay.”

The proposal introduces a statute of limitations for all Troubles-related crimes, accompanied by a statutory bar on investigations by the Police Service of Northern Ireland and Police Ombudsman. It also ends all judicial activity with regard to criminal and civil cases and inquests. Instead, it will introduce an information recovery body. The Commissioner notes that this proposal would fall short of the UK’s obligations under the European Convention on Human Rights to carry out effective investigations into serious human rights violations. Resembling a broad-based and unconditional amnesty, including for killings and torture, the move “effectively means that none of those involved in any serious violations will be held to account.”

“The people of Northern Ireland have waited far too long for progress in dealing with legacy issues”, says the Commissioner. By shifting away from previously agreed approaches, rather than implementing them, the current proposals are likely to only delay progress in this area. The Commissioner calls for further reflection on the responsibility of the UK government in creating the long-standing delays in delivering on promises regarding legacy issues.

Finally, the Commissioner raises concern about the lack of a victim-centred approach. She notes that the pursuit of justice, including through investigations and prosecutions, is central to the efforts of many victims and their families in coming to terms with the past, with the prospect of facing more delays or an abrupt end to their search for justice clearly being devastating for them. “Taking the option of investigations and prosecutions off the table unilaterally undoubtedly fails to meet the wishes of a significant group of victims”, she writes.