Safety of journalists: a meeting with the Serbian media actors 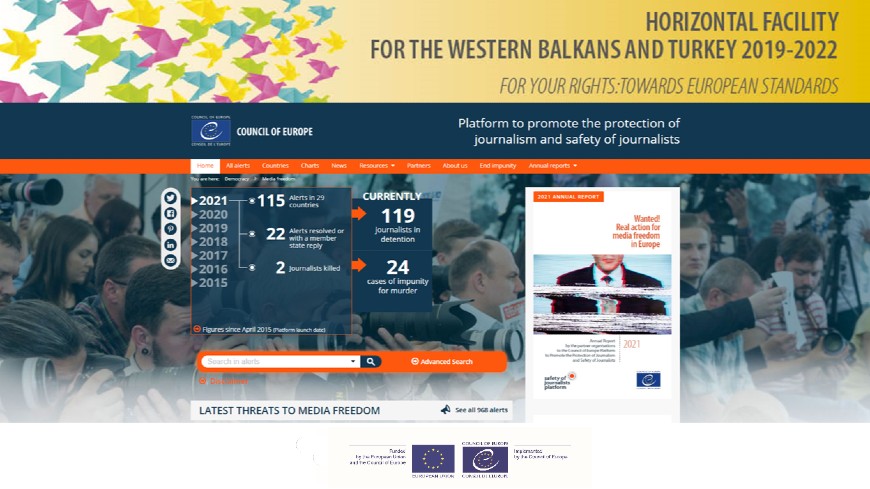 An online meeting on the Council of Europe’s Platform for the Protection of Journalism and Safety of Journalists (Platform) was held on 9 June 2021 as a support to actors in Serbia dedicated to improvement in the field of the protection and safety of journalists. Members of the Working group for recording cases of pressures on journalists and other media actors, which was established by Ombudsman and media and journalists’ associations in 2020, participated in this meeting. The Working group was established with the aim to comprehensively record attacks and pressure on journalists and media actors and create an efficient mechanism for protecting their safety and rights.

Safety of journalists is one of the top priorities for the Council of Europe - attacks against journalists and other media actors constitute particularly serious violations of human rights because they target not only individuals, but deprive others of their right to receive information, thus restricting public debate, which is at the heart of pluralist democracy.

Being able to exercise the right to freedom of expression without fear implies that, as a minimum, the safety, security and protection are guaranteed effectively in practice for everyone, in particular journalists and other media actors, and there is an expectation that they can contribute to public debate without fear and without having to modify their conduct due to fear.

During this meeting representatives of the Platform presented key and operational aspects relating to its functioning, shared their experiences and best practices with participants from Serbia encouraging their further efforts and contribution to creation of favourable or enabling environment for freedom of expression.

The meeting was organised in the framework of the action “Freedom of expression and freedom of the media in Serbia (JUFREX 2)” which is a part of the joint European Union and Council of Europe programme “Horizontal Facility for the Western Balkans and Turkey 2019-2022”.