Luxembourg: Opening Ceremony of the Exhibition on the Cultural Routes of the Council of Europe 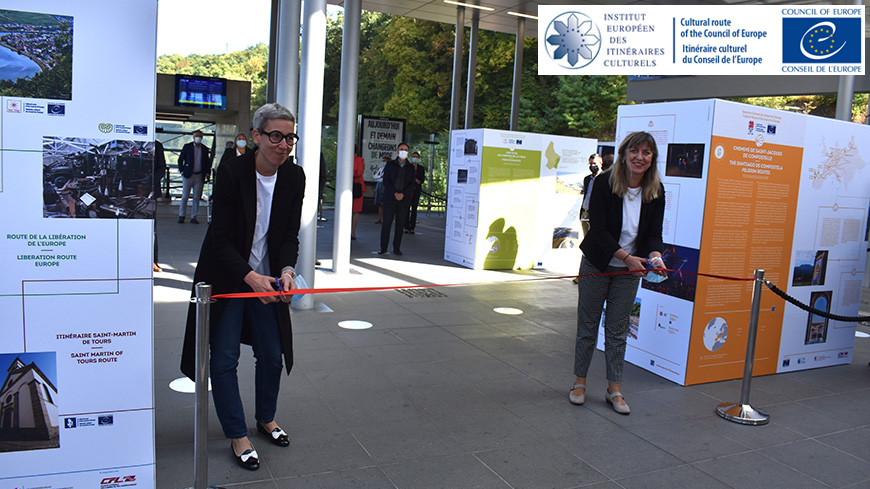 From left to right: Mrs. Sam TANSON, Minister of Culture of Luxemboug, and Mrs. Snežana SAMARDŽIĆ-MARKOVIĆ, Director General of Democracy of the Council of Europe, during the official opening of the Exhibition.

The opening ceremony of the exhibition showcasing the Cultural Routes of the Council of Europe crossing Luxembourg took place on 17 September 2020, with every respect for the sanitary protective measures related to COVID-19.

Opening speeches were delivered by Mrs. Sam TANSON, Minister of Culture of Luxembourg, Mrs. Snežana SAMARDŽIĆ-MARKOVIĆ, Director General of Democracy of the Council of Europe, Mr. Christian BIEVER, President of the European Institute of Cultural Routes, and Mr. François MOYSE, President of the European Route of Jewish Heritage. Welcoming remarks were addressed by Mrs. Alessandra NONNWEILER, Head of Communication of the Luxembourg National Railway Company (CFL), to welcome the visitors in the CFL Funicular Hall.

As explained by Mrs. Samardžić-Marković, this initiative “represents an opportunity for Luxembourgers to rediscover different sites of their cultural heritage from a European perspective, bearing witness to our common cultural heritage, but also for international visitors to discover the cultural and historical riches of Luxembourg and Europe, and sometimes to link these local heritage sites to the history of their own country”.

Mrs. Tanson, Minister of Culture, expressed her support by stressing the need to keep organizing cultural events, as she witnesses a real “thirst for culture” among European citizens.

The exhibition will be opened to visitors until 17 November 2020 at the Funicular Hall, Pfaffenthal (Luxembourg).

The digital edition of the Exhibition, the photo and video gallery of the Opening Ceremony and other contents are available here.