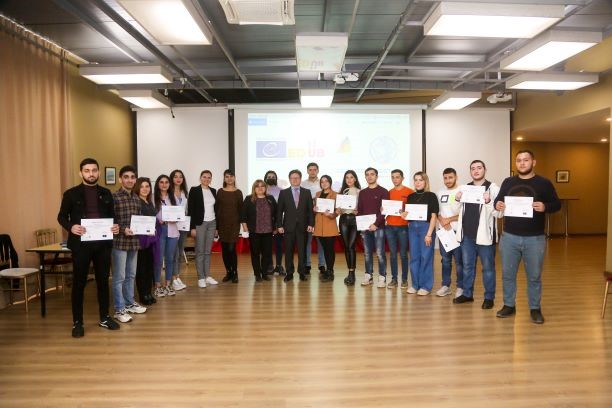 The Local Youth Peace Camp 2021 was held from 30 October to 3 November in Baku. The aim of the project was to raise awareness of young people from conflict-affected regions of Azerbaijan on the field of peacebuilding, to explore peace-related concepts as well as to increase the participation of young people in promotion of peace in Azerbaijani society.

The camp brought together young people from different conflict-affected regions of Azerbaijan, who had little or no experience in the field of peacebuilding. Throughout the programme of the camp, the participants were equipped with the competences necessary in peacebuilding process such as non-violent communication, active listening, reconciliation, and empathy.

The Camp was organised following non-formal methodologies and having Human Rights Education as its core guidelines. The content of the programme was primarily based on the content and methodology used in the Youth Peace Week 2021 with a few modifications such as how to identify fake and real news and the history of peacebuilding in Azerbaijan. On the first day, the participants were introduced to the peace-related concepts, which was followed by the introduction of human rights education on the second day. On the third day, the participants learned about the conflict transformation tools and how not being able to identify real news can lead to the unwanted consequences, especially during war. On the fourth day, guest speakers gave a presentation about the history of peacebuilding in Azerbaijan and placed importance on the participation of Azerbaijani youth in the peacebuilding process.

On the last day of the camp, ambassador Zoltán Hernyes, the head of the Council of Europe Office in Baku, gave a closing speech and introduced the opportunities by the Council of Europe to take an active role in the peacebuilding process as well as presented the certificates to participants. The participants emphasized the transformational impact of the camp on their mindset and expressed how they are empowered to take further steps to contribute to the peacebuilding process in Azerbaijan.