About the Council of Europe - Overview

Founded in 1949, the Council of Europe is one of the oldest and the biggest European organisation, which unifies 46 member states and promotes the main principles of the Human Rights. During its 50 years' activity the organisation has deepened and spread its field of action throughout the whole continent. The global changes in the European History - collapse of the Soviet Union, fall of the Berlin wall and the end of the cold war - have defined an increased number of applications for the Council's membership and called for establishing a new priorities and an appropriate strategy.

After the end of the World War II, states were determined to ensure that such a tragedy would never happen again. Winston Churchill in his speech of 19 September 1946 in Zurich was the first to point out that there was a need for "a remedy which, as if by miracle, would transform the whole scene and in a few years make all Europe as free and happy as Switzerland is today. We must build a kind of United States of Europe".

On 7 May 1948 the Hague Congress took place where more than thousand delegates from twenty countries sketched out all the themes around which a "united" Europe was to be built. A series of resolutions was adopted foreseeing, inter alia, the establishment of a consultative assembly elected by national parliaments, the drafting of a European charter of human rights and the setting up of a court to enforce its decisions.

Short after the Hague Congress, Belgian Minister of Foreign Affairs Paul Henri Spaak called for the creation of a European Assembly, with wide-ranging powers, composed of members of parliament from the various states and deciding by a majority vote. Although Great Britain, being in favour of a body of a purely consultative nature, rejected this proposal, a compromise was reached in January 1949: a Council of Europe consisting of a Consultative Assembly to meet in Public and a Committee of Ministers with decision-making powers to meet in private.

On 5 May 1949, in St James's Palace, London, the treaty constituting the Statute of the Council of Europe was signed by ten countries: Belgium, France, Luxembourg, the Netherlands, the United Kingdom, Ireland, Italy, Denmark, Norway and Sweden. The Council of Europe was thus ready to start work. Its first sessions were held in Strasbourg, which was to become its permanent seat. In the initial flush of enthusiasm, the first major convention was drawn up: The European Convention on Human Rights and Fundamental Freedoms, signed in Rome on 4 November 1950 and coming into force on 3 September 1953.

As it was stated in the Statute "the aim of the Council of Europe is to achieve a greater unity between its Members for the purpose of safeguarding and realizing the ideals and principles which are their common heritage, and facilitating their economic and social progress. Those objectives were to be reached "through the organs of the Council by discussion of questions of common concern and by agreements and common action in economic, social, cultural, scientific, legal and administrative matters and in the maintenance and further realisation of human rights and fundamental freedoms."

During the period from 1949 to 1970 Greece, Iceland, Turkey, Germany, Austria, Cyprus, Switzerland and Malta joined the organization. Some other major developments during this period include the first hearing of the European Court of Human Rights in 1960; the signing of the European Social Charter on 18 October 1961 in Rome; the introduction of first specialized ministerial conferences in 1959.

The Council of Europe's first major political crisis came in 1967 when the Greek colonels overthrew the legally elected government and installed an authoritarian regime. On 12 December 1969, just a few hours before a decision would have been taken to exclude Greece, the colonel's regime denounced the European Convention on Human Rights and withdrew from the Council of Europe. On 28 November 1974 Greece returned to the Organisation after democracy was restored following the fall of the dictatorship. In the meantime, the Cypriot crisis broke out in the summer of 1974 and culminated in the partitioning of the island after Turkish military intervention.

A new crisis arose in 1981 when the Parliamentary Assembly withdrew the Turkish parliamentary delegation's right to their seats in response to the military coup d'etat a few weeks earlier. The Turkish delegation only resumed its place in 1984 after the holding of free elections.

Starting from 1985 the first steps towards introducing democracy to Central and Eastern Europe were made. Convinced that unity in diversity was the basis of the wealth of Europe's heritage, the council of Europe noted that their common tradition and European identity did not stop at the boundaries between the various political systems, focusing on cultural co-operation as a means of promoting a lasting understanding between peoples and between governments. The Council of Europe, the guardian of human rights, became a kind of antechamber for negotiating he transition from dictatorship and democracy.

On 6 July 1989 in the first address by a Soviet leader to an assembly of Western European parliamentarians, Mikhail Gorbachov put forward a new disarmament proposal. In 1989 the assemblies of Hungary, Poland, USSR and Yugoslavia were granted a special guest status, thus creating a path for their full accession.

After the fall of the Berlin wall on 9 November 1989, the CoE Secretary General stated that the Council was the only organisation capable of encompassing all the countries of Europe, once they had adopted democratic rules.

On 6 November 1990, referring to his country's accession to the Council of Europe, the Hungarian Minister of Foreign Affairs said the event marked the first step in the re-establishment of the unity of the continent. Soon special programmes were designed to help the European partners in the process of democratic transition and to become a full member of the European democratic and legal community.

At the initiative of Francois Mitterand, the first summit of the heads of state and government of the Council of Europe's member states took place in Vienna on 8 and 9 October 1993. The Vienna Summit confirmed and extended the enlargement policy of the Council of Europe. It also laid the ground for Protocol 11 to the European Convention on Human Rights making its machinery more expeditious and effective.

Thus, the democratisation process in Central and Eastern Europe led to Hungary's accession in 1990, Poland's in 1991, Bulgaria's in 1992 and Estonia, Lithuania, Slovenia and Romania in 1993. That of the Czech Republic and the Slovak Republic replaced Czechoslovakia's accession from 1991 in 1993. Latvia joined the Council of Europe on 10 February, Moldova and Albania on 13 July and Ukraine and the former Yugoslav Republic of Macedonia on 9 November 1995, Croatia on 6 November 1996, Georgia on 27 April 1999, Armenia and Azerbaijan on 25 January 2001, Bosnia and Herzegovina on 24 April 2002, Serbia and Montenegro on 3 April 2003. 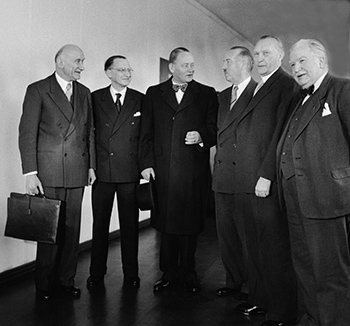 These men of dialogue, who had lived through two world wars and had first-hand experience of a number of European cultures, were the pioneers of a Europe of peace founded on the values of human rights, democracy and the rule of law.