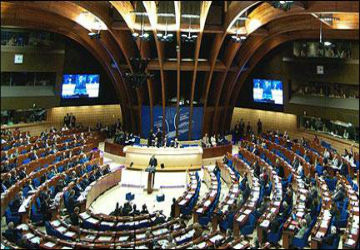 In recommendations to the Council of Europe's executive body, the Assembly demands action from the 46 governments – and they, via the Committee of Ministers, must reply. In practice PACE acts as a "motor", driving forward new ideas.

In more than fifty years of existence, the Parliamentary Assembly of the Council of Europe has shown its great flexibility and adaptability as an international inter-parliamentary body to the developments in Europe, and in particular to the dramatic historic changes which have taken place over the last years. No other international parliamentary forum was so well equipped as the Parliamentary Assembly to integrate the new democracies of Central and Eastern Europe into the family of the other European democracies.

Functioning of the Parliamentary Assembly

Most of the reports debated in plenary session or at the Standing Committee are prepared by a committee.

The general committees of the Assembly are the following:

6. Committee on Equality and Non-Discrimination (AS/Ega)

8. Committee on Rules of Procedure, Immunities and Institutional Affairs (AS/Pro).

9. Committe on Election of Judges to the European Court of Human Rights, more

The sessions of the Parliamentary Assembly are divided into four part-sessions, each lasting for about a week at the end of January, April, June and the beginning of October.

Seats allocated to members in the Chamber are arranged in the shape of a horseshoe and allocated in alphabetical order. Consequently members do not sit in national delegations or in political groups.

According to the Statute, the official languages of the Council of Europe are English and French. However, the Assembly provides interpretation in German, Italian and Russian as additional working languages.

The Table Office advises members of the Assembly, secretaries of delegations, of political groups and other officials on how best to achieve their objectives within the Rules of Procedure and serves as custodian of these rules.

The Assembly's plenary debates are held in public while committees meet generally in camera. The debates are conducted according to the principles observed in national parliaments.

Only members duly designated by the national delegation and who have signed the register of attendance for the specific sitting shall be entitled to vote. The Assembly normally votes by using the electronic voting system.

A two-thirds majority is required for questions such as a draft recommendation or draft opinion to the Committee of Ministers or the adoption of urgent procedure. In respect of a draft resolution and any other decision, a majority of the votes cast is required.