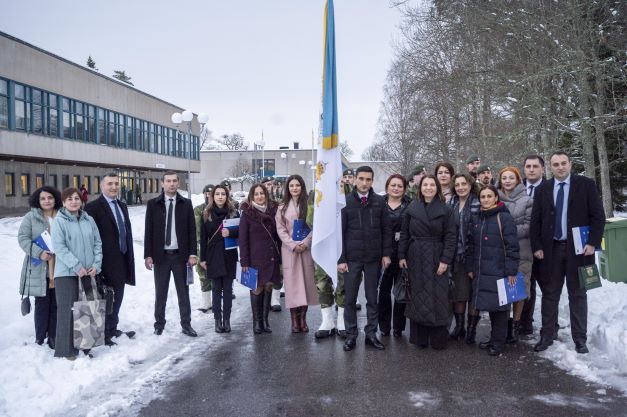 On 22-23 November 2022, a delegation from the Ministry of Defence (MoD) and the Human Rights Defender’s Office of the Republic of Armenia (HRDO) consisting of 12 persons, participated in a study visit held in Swedish Armed Forces´ Headquarters in Stockholm, Sweden. The visit was organized within the framework of the Council of Europe Project “Human Rights and Women in the Armed Forces in Armenia – Phase II.

The delegation included the Assistant and the Gender Advisor of the Minister of Defence, the Head of the Human Rights and Integrity Building Centre of the MoD, Deputy Human Rights Defender, representatives of the Women Councils of military units and other professionals from the MoD and the HRDO.

The two-day visit consisted of briefings and discussions at the Swedish Armed Forces on disciplinary system, including but not limited to the whistle-blower protection in armed forces, know-how and methodologies required to be an effective instrument of human rights and equality promotion in the army, including prevention of hazing and discrimination. In addition, a visit to one of the garrisons was organised, where the representatives of the Armenian delegation met with local employers and military police. The Armenian Delegation also visited the Nordic Centre for Gender in Military Operation.

The Armenian and Swedish counterparts emphasized that the study visit provided an opportunity to discuss topics of mutual interest and common challenges with the peers. The representatives of the Armenian delegation were particularly interested in the system of military discipline, including the whistle-blower system, of as well as the conscription, which from 1 July 2017 became mandatory in Sweden for male and female. According to the Program of the Government of Armenia for 2021-2026, strengthening human rights and promoting women in the armed forces is a part of the strategic human rights agenda of the Government of Armenia. The large-scale process of structural and substantive reforms of the Armed Forces of Armenia has been launched with a view to gradually transition to a professional army. With this respect the experience of Sweden was of a particular interest.