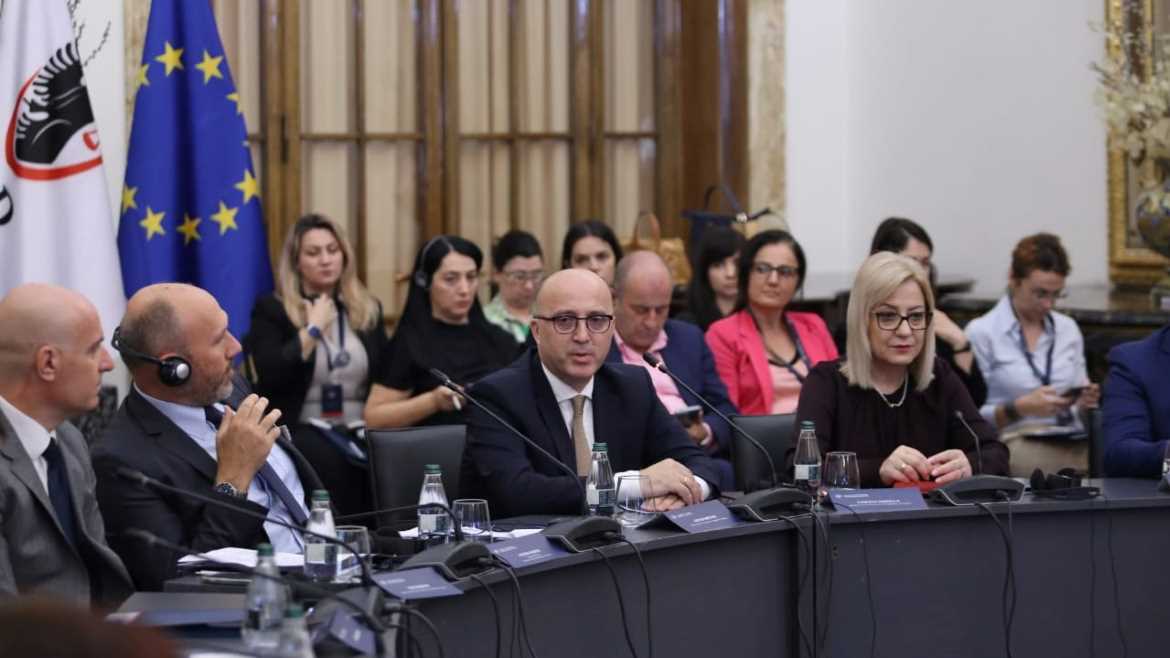 Heads and representatives of Justice Inspection Services from Europe have gathered today in Tirana for the International Conference "Public interest in the administration of justice and independence of magistrates”, organised by the Albanian High Inspector of Justice in partnership and co-operation with the European Network of Judicial Inspectors (RESIJ) and Council of Europe's European Commission for the Efficiency of Justice (CEPEJ).

Magistrates of Inspection Services of Belgium, Bulgaria, France, Greece, Italy, Portugal, Romania, Spain and Albania shared their expertise and experiences concerning key challenges to the independence of magistrates and the importance of the public interest in the administration of justice.

The High Inspector of Justice of the Republic of Albania, Artur Metani, emphasised the need for co-operation between inspection services as to getting the best models from each other, to co-ordinate methods of control and evaluation of justice institutions in accordance with common European values, regardless of the diversity of political, legal, social or economic cultures.

"History in Europe and broader is showing that the independence of magistrates should not be taken for granted, but remains an issue that belongs to all countries. This is the standard of a common dimension of our societies. This is an international standard. Today, all countries must step up their efforts to strengthen this independence, but also to increase the efficiency and accountability of the organs of the justice system. The two cannot walk, except together. The more responsible a magistrate is, the more guaranteed the citizen is for his rights. The more independent the magistrate, the more democratic the society. Both of these standards, the quality of justice and the independence of magistrates, are a priority for all countries", said Metani.

In her remarks, Albanian Speaker of Parliament Lindita Nikolla praised the change that has taken place since the adoption of the justice reform. “Today, the real independence of judges and prosecutors is being consolidated in parallel with their "dependence" on the Republic, the Constitution, laws and the public interest. The justice system had reached a point where it did not hide its dependence, both politically and financially. Today, the threads that connected the system with the above corrupt forms have been torn and are being torn day by day. The judiciary is being built, strengthened and affirmed as an independent power. The other myth, that the system can not self-reform, is also collapsing. In this regard, the High Inspectorate of Justice, one of the new and most important governing bodies of the system, has its merits”, said Nikolla

In his address, Alexis Hupin - Chargé d’Affaires at the European Union Delegation to Albania, underlined in his speech the great work that has been done with the justice reform, as a European practice and yet a new practice for Albania that comes along with the challenges amid the rules, in addition to relieving the burden of backlog cases, in addition to communicating with the public, but also to recruiting more inspectors in the case of the High Inspector of Justice. "However, after two years, we estimate that you have really met the expectations and there is still a lot of work to be done. As Mrs. Speaker mentioned, you have come a long way, but the inappropriate influence and interference in the affairs of the judiciary continues. They take different forms. They also take the form of attacks on justice reform as a whole, but sometimes they also take the form of attacks on judges and prosecutors. Consequently, I would like to thank the High Inspector of Justice for his very professional behavior towards this pressure to keep the judiciary accountable but also to maintain it, which is very important for its independence," said Mr. Hupin.

Demian Smith - Chargé d’Affaires at the US Embassy in Albania noted in his speech that today we are seeing a new era where the system is beginning to serve citizens and not just politicians, people with political connections, rich or incriminated. "The United States encourages you to keep up the good work and the hard work, despite the obstacles you face. Together with our EU partners - and I want to join my EU counterpart's comments on the close partnership between the United States and the European Union on justice reform - we supported the launch of Justice Reform in 2016, and we have been there every step of the way, through vetting and the creation of new institutions. We are beginning to see the impact of a cleaner judiciary and dedicated prosecutors and investigators against corruption. It depends on the vigilance and commitment of institutions such as the High Inspectorate of Justice to maintain progress against corruption and to guarantee the integrity of the judicial system. Today, you have important discussions with European partners about what is working and what can be done better. In the end, the real, significant change, belongs to you, the parties in the justice system, to embrace the reform and make the system functional for every Albanian." said, among others, Mr. Smith.

In her address, Muriel Decot – Secretary of the European Commission for the Efficiency of Justice (CEPEJ), focused on the important role of the High Inspector of Justice to ensure that judges and prosecutors uphold the highest professional standards and deliver justice to all citizens. “I take this opportunity to reiterate CEPEJ’s commitment to continue supporting the justice reforms in Albania and the High Inspector of Justice as a key institution of the Albanian justice system”, concluded Decot.

The Deputy Head of the Office of the Council of Europe, Olsi Dekovi, said that: “The independence of the judiciary requires the co-operation of different institutions and legal instruments as well as a combination of conditions and measures that may be different in different countries where each finds its own balance. I am confident that today's conference will help build a platform for judicial inspectors to present, discuss and exchange their experiences, ideas and research, including the challenges of judicial inspection.”

The event is part of RESIJ’s continuous support for the Albanian justice authorities and is aimed at sharing and exchanging valuable experience, ideas and research, relating to the administration of justice, public interest, disciplinary responsibility and independence of judges and prosecutors at the European level.

The results and main findings of the conference will be published (also in Albanian) on the official website of the High Inspector of Justice, providing detailed information for the media and wider public on this topic.

This Conference is organised by the High Inspector of Justice and co-supported by the action on “Strengthening the quality and efficiency of justice in Albania” (SEJIII), part of the joint European Union and Council of Europe programme ‘Horizontal Facility for the Western Balkans and Turkey 2019-2022”.