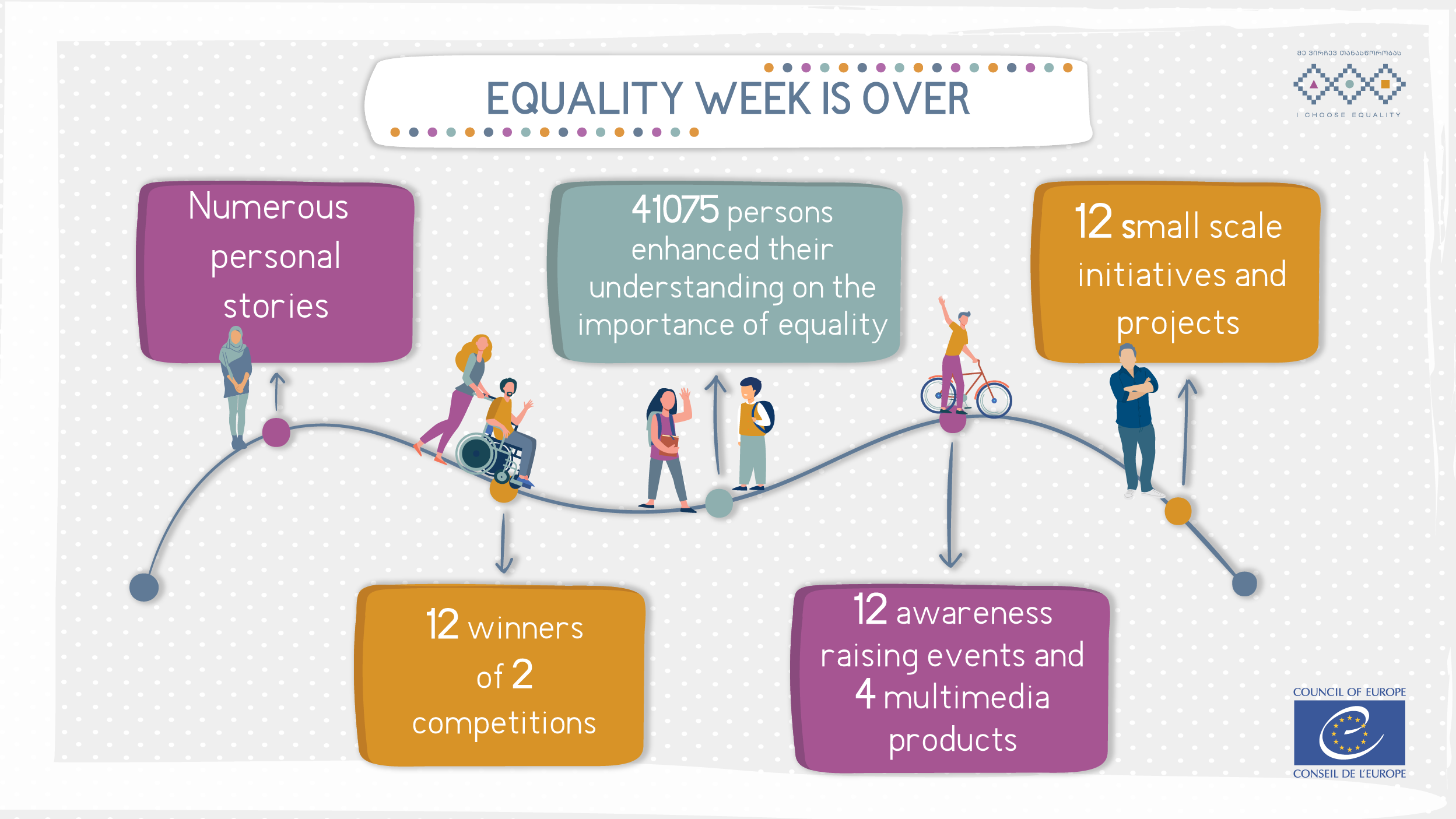 The Council of Europe Office in Georgia together with partner organisations organised the second Equality Week (9-16 November) in Georgia. The Equality Week is an annual event which aims to raise awareness about the importance of diversity and equality in Georgia as well as to provide information on redress mechanisms for the victims of discrimination. It is celebrated around the International Day for Tolerance on 16 November and is implemented as part of the I Choose Equality campaign.

Due to the COVID-19 pandemic situation, this year the Equality Week moved its activities online. The activities implemented together with the partner organisations were diverse and covered various focus groups. In total 12 awareness raising events were organised and 4 multimedia products were developed. Online webinar  was held together with Tolerance and Democracy Institute (TDI) introducing personal stories about stereotypes, prejudices and another online webinar was organised with the Public Defender’s Office on  the importance of equality, personal support and diversity. A webinar organised together with the Coalition for Equality discussed the antidiscrimination law in practice. Online webinars were organised for students and the general public.  Some of the webinars are available online in Georgian:  “Human Rights Talks: Personal Stories”, “Stories of Equality and Diversity”, "Anti-discrimination Law and Practice - Latest Challenges"

Online events also included training on identifying and investigating hate crimes run by  the Ministry of Internal Affairs. An online training course on “Equality week for school students” was implemented together with the Ministry of Justice, where students were introduced to the antidiscrimination law and the international practice of human rights protection.

The presentation of the publication “ALL IN! Towards Gender Balance in European Sport” went online together with the Ministry of Education, Science, Culture and Sport and Parliament in order to present the data on equality in sports. The Prosecutors Office held a public meeting with students on the topic of the importance of equality, the fight against hate speech, discrimination and hate crimes. Batumi State University and Ilia State University organised online discussions and an exhibition on the topic of equality and diversity. Together with the Ministry of Education, Science, Culture and Sport the Georgian movie “Listen to the Silence” by Mariam Chachia was screened online. The movie shows the problems of the hidden world of deaf people. Together with the Government’s Administration, a quiz on tolerance was also developed.

4 videos were recorded and presented during the Equality Week in order to raise awareness about the equality and redress mechanisms against discrimination.

The European ambassadors also expressed their support for equality and diversity with their messages in a  video ‘Ambassadors for Equality’.

Two new videos  produced with the Ministry of Internal Affairs and the Prosecutors’ Office were also presented during the Equality Week. The videos illustrate the existing  redress mechanisms against discrimination:

Video about Prosecutor’s Office fighting hate crimes and video about witness and victim coordinator’s service at the Ministry of Internal Affairs.

The Equality Reporters and Equality Ambassadors were announced during the Equality week. More information about the successful candidates can be found on I Choose Equality Facebook page:

The list of winners for Equality Ambassadors and Equality Reporters.

A few activities were implemented under the “We together, We CAN” initiative together with the Office of the State Minister for Reconciliation and Civic Equality on equality and diversity. Other trainings were organised together with the Office of Resource Officers of Educational Institutions which aimed at integrating human rights education tools in educational institutions.

In total the online activities implemented during this second Equality Week reached 41 075 people in Tbilisi and regions of Georgia.

Lean more about other activities organised during Equality Week on the I Choose Equality campaign’s Facebook page: https://www.facebook.com/IChooseEquality/

The Equality Week is implemented in the framework of the I Choose Equality Campaign which is part of  the co-operation project “Fight against Discrimination, Hate Crimes and Hate Speech in Georgia”. The project is implemented under the Council of Europe’s Action Plan for Georgia 2020-2023 with the support of the Danish Neighbourhood Programme in Georgia (DANEP).