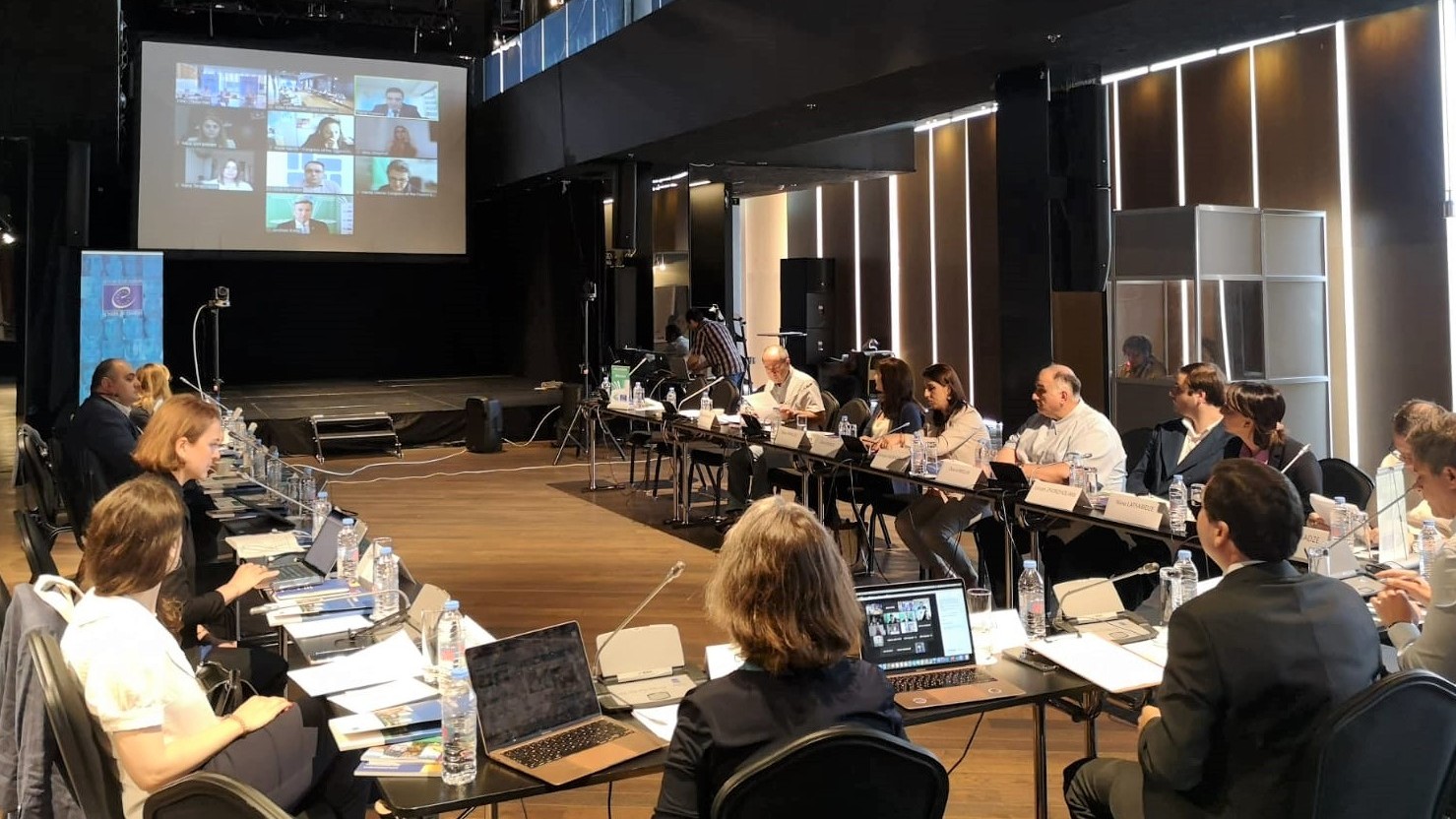 On 21 June 2022, the second Steering Committee meeting of the Project "Strengthening participatory democracy and human rights at local level in Georgia" was held in Tbilisi, Georgia, in a hybrid format. Steering Committee members discussed the results achieved, priorities and needs of partners and beneficiaries, as well as the outlook until the end of the year.  Such outlook includes further capacity development, peer-to-peer exchanges, and the support of local initiatives on human rights and on innovative citizen participation tools.

To provide their feedback on the project intervention, as well as their vision and expectations, some project beneficiaries were invited to the meeting as associated members. Among them, elected representatives from Dedoplistskaro, Ozurgeti, City of Rustavi, City of Tbilisi, and Tetritskaro, as well as representatives of Youth Assembly of Racha, International Association Civitas Georgica, Civil Society Institute and Regional Development Center shared their experience and expressed their satisfaction with the project’s focus on civil participation, human rights, and non-discrimination. In particular, the active involvement of underrepresented groups, such as ethnic minorities or persons with disabilities, was identified as an important added value of the project.

The importance of civil participation as a fundamental aspect of local democracy and human rights was confirmed by all participants and the forthcoming focus on enhancing youth participation was eagerly welcomed. The project partners have reiterated their commitment to strengthened cooperation and dialogue among all parties and for continuing consultations.

Stefan SIRBU, Deputy Head of the Council of Europe Office in Georgia, emphasized the notable progress of the project and referred to the fact that the implemented activities covered all seven target regions of the project, namely Guria, Imereti, Kakheti, Kvemo Kartli, Racha-Lechkhumi and Kvemo Svaneti, Samtskhe-Javakheti, and Tbilisi. He underlined the vital importance of a strong cooperation with project partners, from both public sector and civil society.

Andreas KIEFER, Secretary General of the Congress for Local and Regional Authorities, underlined how adopting a human rights lens in local governance makes better policies, and ultimately better democracies. He added how the awareness of human rights allows local authorities to contribute more effectively within multilevel dialogue structures, and to voice their needs and priorities from an evidence-based perspective.

Daniel POPESCU, Head of Department of Democracy and Governance, stressed the need of enhancing deliberative democracy through instruments such as the “Citizens Assemblies”, giving better opportunities to citizens to be involved in decision-making at the local level. He welcomed the fact that preparations towards Citizen Assemblies have already started in two Georgian municipalities. Mr. POPESCU also highlighted the necessity of continuing to strengthen civil society in parallel with local authorities, and to promote dialogue between them.

Alexander KARNER, Head of Office of the Austrian Development Agency in Georgia, acknowledged the progress of the project and stressed the importance of civil participation in current decentralisation process that ultimately contributes to building healthy and resilient communities.

This event took place in the framework of the project “Strengthening Participatory Democracy and Human Rights at Local Level in Georgia”, implemented by the Congress of Local and Regional Authorities and the Directorate General of Democracy, Division of Elections and Participatory Democracy, within the Council of Europe Action Plan for Georgia 2020-2023 with the financial contribution of the Austrian Development Cooperation. The project aims to strengthen institutional frameworks for citizen participation, support local authorities and their national association in their efforts to protect and promote human rights and ensure that civil society organisations have real impact on local decision making.