You were redirected to https://www.coe.int/en/web/special-representative-secretary-general-migration-refugees/newsletter-september-2018/-/asset_publisher/cVKOAoroBOtI/content/ceb-provides-iom-with-a-1-million-grant-for-a-reception-facility-in-bosnia-and-herzegovina?inheritRedirect=false . 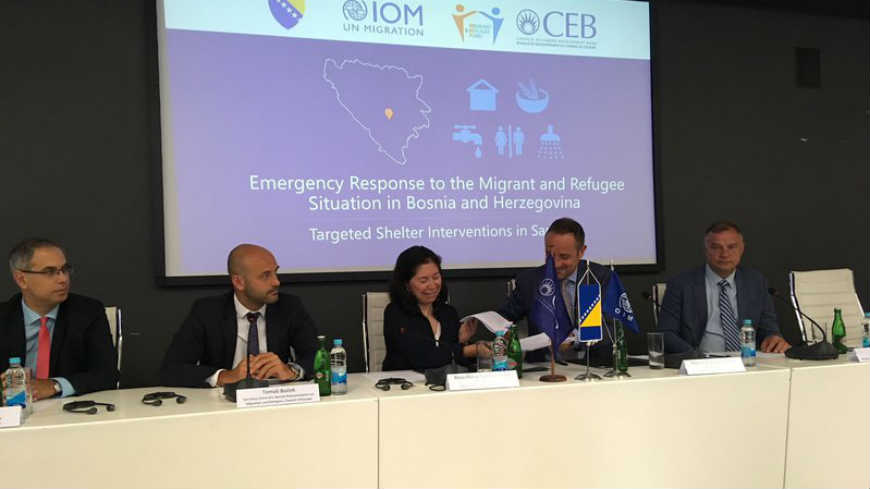 On 25 July 2018, The Council of Europe Development Bank (CEB) signed an Agreement for a €1 million grant from its Migrant and Refugee Fund (MRF) to help Bosnia and Herzegovina cope with renewed migratory inflows in 2018. Since the end of 2017, Bosnia and Herzegovina has seen a steady increase in the number of migrants and refugees entering the country, thereby requiring further support from the international community to provide shelter, food, healthcare and also protection services to the most vulnerable.

The MRF grant will enable the setting-up of a reception facility in the area of Sarajevo which will contribute to a more structured response to the current migrant and refugee situation. The action will be targeted to upgrading the Ušivak facility in Hadzici, Sarajevo, currently administered by the Federal Red Cross. The grant will fund the refurbishment and equipment of existing constructions on the site, and the procurement of sleeping containers/rubb halls, sanitary units and sleeping material to accommodate some 400 persons.

The IOM’s Chief of Mission in Bosnia and Herzegovina, Peter Van der Auweraert, welcomed the CEB delegation and thanked its members for their contribution to this bilateral cooperation. “The support of CEB is crucial, in a moment where in Bosnia we have more than 4000 people – the majority still sleeping rough, eating only once a day and having very limited access to water and sanitary services. The creation of the reception centre in Ušivak will not only respond to these basic needs, but also create a space where migrants and refugees can have access to a number of other services, such as psychosocial counselling, legal aid and access to asylum.” Vice-Governor Sánchez-Yebra underlined the CEB’s commitment to continue giving its full support to its member countries receiving migrants and refugees and praised IOM as a valued partner to the Bank in this respect. “This MRF grant extended to IOM will constitute a critical element in expanding the reception capacity for migrants and refugees in Bosnia and Herzegovina and we hope it will encourage other international and local actors to provide services and assistance in the newly established centre.” The Special Representative of the Secretary General on Migration and Refugees (SRSG), Ambassador Tomáš Boček, also attended the signing ceremony. “The MRF grant to address the emergency situation in Bosnia and Herzegovina is a timely and well-targeted action. The CEB has been playing an important role in complementing the COE activities on protecting refugee and migrant children, with very tangible financial support”, stated Ambassador Boček.