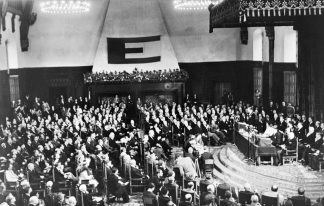 The Council of Europe was founded to:

- Defend human rights, parliamentary democracy and the rule of law
- Develop continent-wide agreements to standardise member countries’ social and legal practices
- Promote awareness of a European identity based on shared values and cutting across different cultures

Since 1989, the main job of the Council of Europe has become:

- Acting as a political anchor and a human rights watchdog for Europe’s post-communist democracies
- Assisting the countries of central and eastern Europe in carrying out and consolidating political, legal and constitutional reform in parallel with economic reform
- Providing know-how in areas such as human rights, local democracy, education, culture and the environment

The Council of Europe’s Vienna Summit in October 1993 set out new political aims. The heads of state and government cast the Council of Europe as the guardian of democratic security – founded on human rights, democracy and the rule of law. Democratic security is an essential complement to military security, and is a pre-requisite for the continent’s stability and peace.

During the Second Summit in Strasbourg in October 1997, the heads of state and government adopted an action plan to strengthen the Council of Europe’s work in four areas: democracy and human rights, social cohesion, the security of citizens and democratic values and cultural diversity.  The Organisation continues to grow while at the same time increasing its monitoring to ensure that all its members respect the obligations and commitments they entered into when they joined.
Description

Visit the interactive map prepared on the occasion of the 60th anniversary of our organisation: www.coe.int/60years/