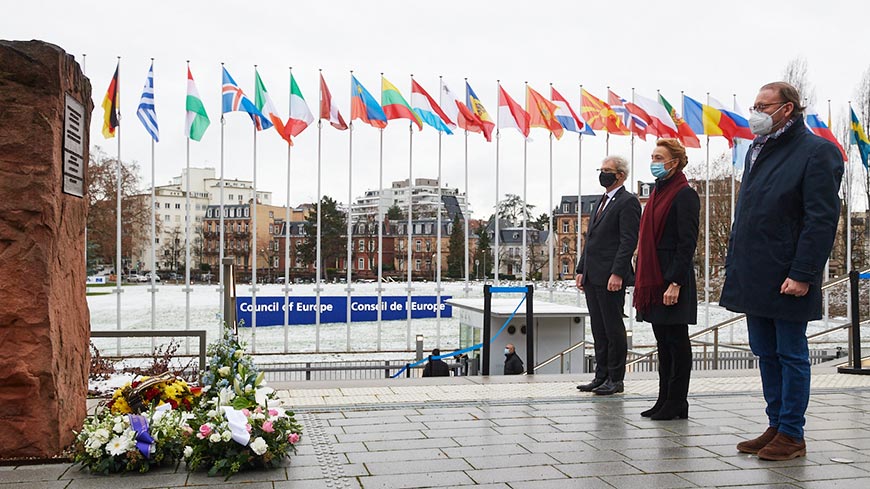 To mark Holocaust Remembrance Day on 27 January, Council of Europe leaders and representatives of victims have been paying tribute to the millions of people who perished, many of them in camps like Auschwitz-Birkenau, which was liberated on 27 January 1945.

Secretary General Marija Pejčinović Burić said “Every year on this day we search for words that will describe the terror of the Holocaust. But words fail us. We cannot capture the suffering and loss. Our responsibility now is to ensure that we do not fail those who lost their lives, and those who have come after. That we remember, and that we act, to preserve memory, to ensure dignity and to build societies in which people live in the safety and security that each of us deserve”.

The President of the Parliamentary Assembly, Rik Daems, said “What happened behind the walls of Auschwitz-Birkenau, Treblinka and the other camps, or under the bullets of the Einsatzgruppen does not only concern the families of the victims or their descendants. It concerns us all, because it is an attack and a violation of human dignity which stands at the heart of human rights. Our Assembly will continue its work on combatting Antisemitism. At a time when Antisemitism and attacks against the memory of the Holocaust, propagated by fake information and relayed by social media, persist in Europe and beyond, it is more than ever necessary to keep the memory of the Holocaust alive”.

Video messages from Secretary General Burić and President Daems can be viewed on a special page together with video statements by other dignitaries and spokespersons for organisations representing the victims.

Message from Anders Knape, President of the Congress