Srebrenica: the mothers’ fight for justice should inspire us all 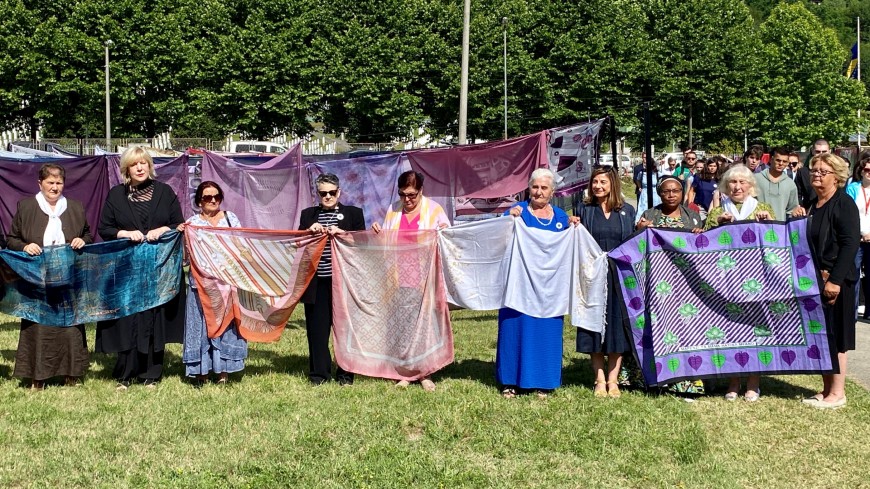 The Council of Europe Commissioner for Human Rights, Dunja Mijatović has taken part in the inauguration of the ‘Mother’s Scarf’ art installation initiated by the Mothers of Srebrenica, as part of the Srebrenica Heroines Initiative, and issued the following statement:

“As we honour the memory of the lost and recognise the suffering of the victims and survivors, we are gathered here in Potocari to inaugurate an art installation of high significance. These scarves and shawls are not mere pieces of fabric. They are a symbol of resistance that represents the relentless battle for truth and justice carried out by the Mothers of Srebrenica for the last 27 years.

The knots tying the scarves and shawls symbolise togetherness. They emphasise the solidarity between women in the face of egregious human rights violations. The thousands of scarves collected are a testament to the wide network of support knitted by the Mothers on their journey for justice. These scarves and shawls transcend any particular group or interpretation. Some have been passed down from mothers and grandmothers, some were worn by survivors as they were escaping atrocities or while they laid their loved ones to rest, others have been donated as a gesture of respect and compassion.

They symbolise grief linking the present and the past, while looking into the future. They are a tribute to the dedication of the Mothers to never give in to hate and to open a path for young generations to live peacefully together, while ensuring that the truth is recognised and the memory of the victims is kept alive. The Mothers’ fight should inspire us all. It is crucial that their call for justice be heard and that we join our forces to counter the deeply rooted culture of genocide denial. Hate speech, genocide denial and glorification of war criminals - which have regrettably intensified these last days in Srebrenica, should be met with condemnation.

That this living installation will grow each year, as it travels throughout the region and around the world, is a recognition of the Mother’s fight, and of their courage and perseverance. Let’s hope this exhibition will help ensure that the message of the Mothers is shared by a growing number of people, cities, and countries across the world, and that they too choose to stand for justice and for the values of equality, respect, diversity and inclusion.”

The Commissioner was in Srebrenica from 9 to 11 July to participate in the Srebrenica Heroines international conference organised by the Movement of Mothers of Srebrenica and Zepa, the Post-Conflict Research Centre and the Srebrenica Memorial Centre. On 11 July 2022, she attended the commemoration of the 27th anniversary of the Srebrenica Genocide.