italiano
Council of Europe Strasbourg 16 May 2022 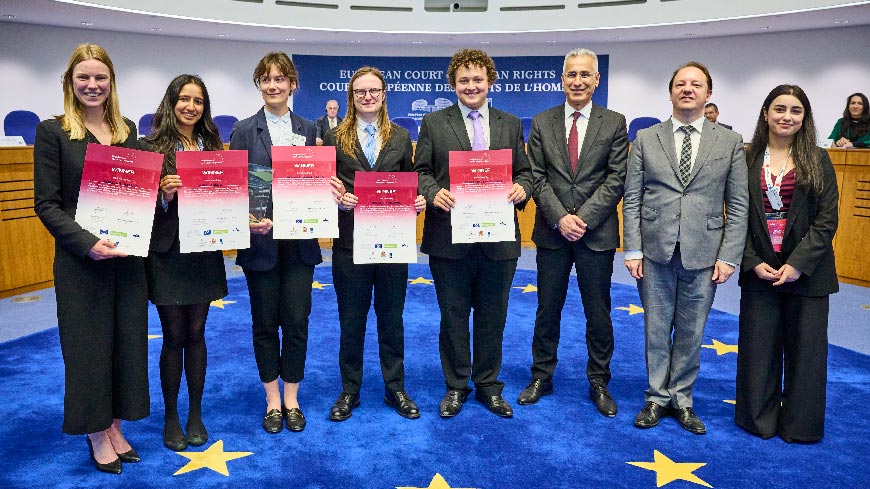 The final round took place at the European Court of Human Rights in Strasbourg on 13 May 2022, with a bench of Judges comprised of prominent figures from the Court and several senior Council of Europe officials. 19 university teams from 12 countries (Austria, Belgium, Germany, Greece, the Netherlands, Romania, Slovakia, Slovenia, Spain, Sweden, Ukraine and the United Kingdom.) have competed in a fictional case related to natural disasters and environmental protection. The winning team was awarded a traineeship at the Court. In total, over 50 teams applied to take part in this edition.

The EHRMCC aims to give law students, who are future lawyers or judges, practical experience relating to the European Convention on Human Rights and its implementation. The competition is organised by the European Law Students Association (ELSA) with the support of the Council of Europe. ELSA is an independent and non-profit organisation representing 60,000 students, located in around 430 universities in 43 European countries. Several countries from the Council of Europe have supported or financially contributed to this tenth competition, in particular Italy, which currently holds the Presidency of the Council of Europe’s Committee of Ministers, as well as Hungary; the Netherlands, Spain and the City of Strasbourg.