Chairmanship of the Committee of Ministers 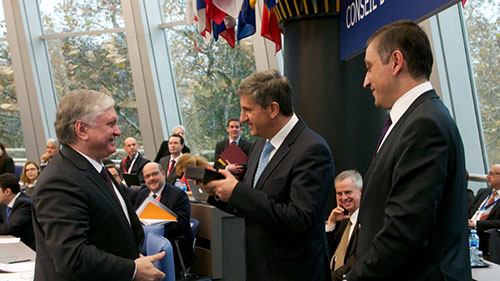 Armenia hands over chairmanship to Austria

Strasbourg, 14.11.2013 - The Chairmanship of the Committee of Ministers of the Council of Europe passed from Armenia to Austria today, at a meeting at the Organisation's Strasbourg headquarters, attended by representatives of its 47 member States.

Before handing over the chairmanship to his successor, the outgoing Chair Edward Nalbandian, Minister for Foreign Affairs of Armenia, gave an overview of his country's achievements during its chairmanship of the Committee of Ministers.

The new Chair of the Committee of Ministers, Michael Spindelegger, Minister for Foreign Affairs of Austria, presented the priorities of the Austrian chairmanship which will run for six months as of today.

At a brief ceremony during the meeting, Minister Spindelegger solemnly handed over to the Secretary General, Thorbjørn Jagland, the instrument of Austria's ratification of the Council of Europe Convention on preventing and combating violence against women and domestic violence, known as the Istanbul Convention (CETS no. 210). Austria pledged that, during its chairmanship, it would "promote measures for an early entry into force of the Convention", which requires 10 ratifications. (more...)

17.10.2013 - Regional meeting of Ministers of Education on the EHEA implementation to be held in Yerevan

The regional meeting of Ministers of Education on the implementation of the European Higher Education Area will be held in Yerevan on 17-18 October 2013, under the aegis of the Armenian Chairmanship of the Committee of Ministers of the Council of Europe. The meeting is co-organized by the Ministry of Education and Science of Armenia, the Council of Europe and the European Students' Union. Delegations from Belarus, Bulgaria, Georgia, the Republic of Moldova, Romania, Russia and Ukraine will participate in the meeting.

The meeting will focus on different parts of the Bologna structural higher education reform process, with a particular focus on the self-certification and implementation of national qualifications frameworks and student participation in the higher education governance.

The Prime Minister of the Republic of Armenia, Tigran Sargsyan, will address the participants of the meeting.

At the end of the meeting a declaration will be adopted.

Link to this page in Armenian