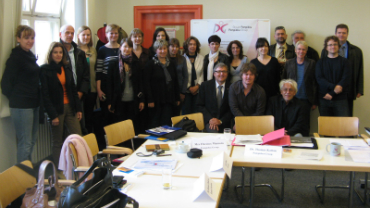 EXASS Net is a European network of partnerships between stakeholders at frontline level responding to drug problems providing experience and assistance for inter-sectoral cooperation.

The initiative to create such a network came from the 2006 Finnish EU Presidency , which identified the need for enhanced cooperation of various actors in the law-enforcement, health and social sectors in tackling drug-related problems. Following the recommendations from a major conference in Turku in September 2006, under the title “Moving Forward Together”, the Finish EU Presidency suggested setting up a European network for multi-agency partnerships tackling drug problems at front-line level.

The Pompidou Group took up this proposal immediately. During the Ministerial Conference of the Pompidou Group in December 2006, the 2007-2010 Work Programme was adopted already including the mandate for the Pompidou Group to set up the proposed network. The network was created in April 2007 and has since met five times: in Helsinki (Finland), Preston (UK), Frankfurt (Germany), Moscow (Russia), Budapest (Hungary) and Amsterdam (Netherlands).