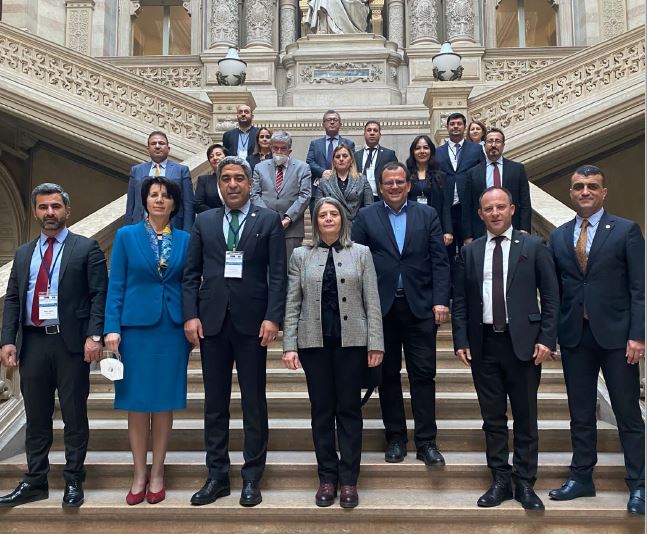 The visiting delegation headed by the Deputy President of the Union of Turkish Bar Associations (UTBA), Sibel Suiçmez, was composed of representatives of the UTBA and several regional bar associations, including İstanbul, Ankara, Mersin, Diyarbakır, Trabzon and Van.

During the meeting at the Austrian Bar-ÖRAK, the President and Vice-President made presentations on their human rights work at the international level and their co-operation with lawyers from other countries. At the Ludwig Boltzmann Institute of Fundamental and Human Rights, a centre of competence for human rights work, strategic litigations were discussed. During the visit to the Association of Austrian Judges, presentations on the judiciary in Austria, general information about the system and about the measures related to the independence and assurance of judges, including the role of the senates organised at federal districts were made. The delegation visited the court room at the Justice Palace as guests of the Austrian Federal Ministry of Justice, and the delegation was welcomed by Deputy Director of the Directorate for International and European Affairs at the Ministry of Justice, and representatives of the Ministry of Foreign Affairs and Ministry of Justice gave presentations on the general structure of the judiciary in Austria, including the safeguards for fair-trial. Statistics were also shared regarding average trial times. The meeting at European Union Agency for Fundamental Rights (FRA) focused on FRA’s work on the EU Charter of Fundamental Rights, victims’ rights and defendants’ rights. During the meeting with OSCE Representative on Freedom of the Media, a presentation was made on the OSCE's role and responsibilities. The delegation also visited the Ambassador for the Permanent Mission of Turkey to the OSCE and talked about the OSCE as an organisation in general and its roles concerning current challenges. The OSCE Ambassador gave an insider's view of the OSCE's role and responsibilities and provided information about the role of Turkey.

The study visit facilitated the establishment of a network between lawyer organisations and human rights centres and NGOs in Vienna and created new synergies for co-operation in various areas, in particular, human rights and commerce, protection of lawyers, trial monitoring and strategic litigation.