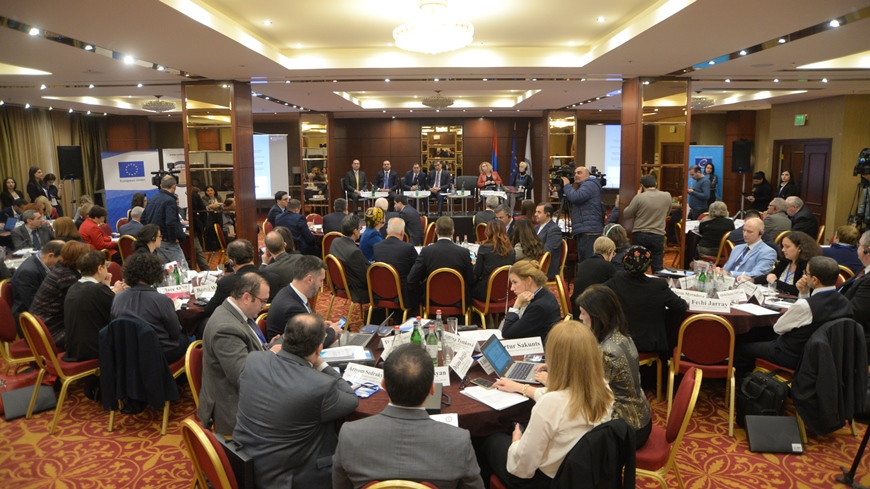 On 28-29 November an international conference marking the 10th anniversary of the National Preventive Mechanism in Armenia was organised in Yerevan to discuss issues related to the prevention of torture and execution of the relevant judgments of the European Court of Human Rights.

On 31 May 2006, Armenia ratified the Optional Protocol to the UN Convention against Torture and other Cruel, Inhuman or Degrading Treatment or Punishment. Following this ratification, in 2008 the law of Armenia recognised the Human Rights Defender as the NPM with the necessary powers and guarantees, including unlimited access to all places of deprivation of liberty. These powers were further broadened and guarantees strengthened by law adopted in 2016.

"This is an immense responsibility – to act as the national preventive mechanism, and I would like to wish the NPM team every success in performing their important duties", said Natalia Voutova, the Head of the Council of Europe Office in Yerevan, while speaking at the conference.

The aim of the event was to contribute to the implementation of Armenia’s commitment to eradicate torture, as well as to be a platform for exchange of experience between national and international partners in the field, including state authorities, international organisations and the civil society.

The event was organised jointly by the Human Rights Defender’s Office of Armenia and the Council of Europe within the framework of two Council of Europe projects,* both of which are aimed at bringing Armenia’s legislative and regulatory frameworks and practice closer to European human rights standards.

* Project “Supporting the criminal justice reform and combating ill-treatment and impunity in Armenia” (funded by the European Union and Council of Europe through Partnership for Good Governance), and Project “Strengthening the Application of European human rights standards in the armed forces in Armenia” (funded by the UK Government's Conflict, Stability and Security Fund and the Council of Europe).