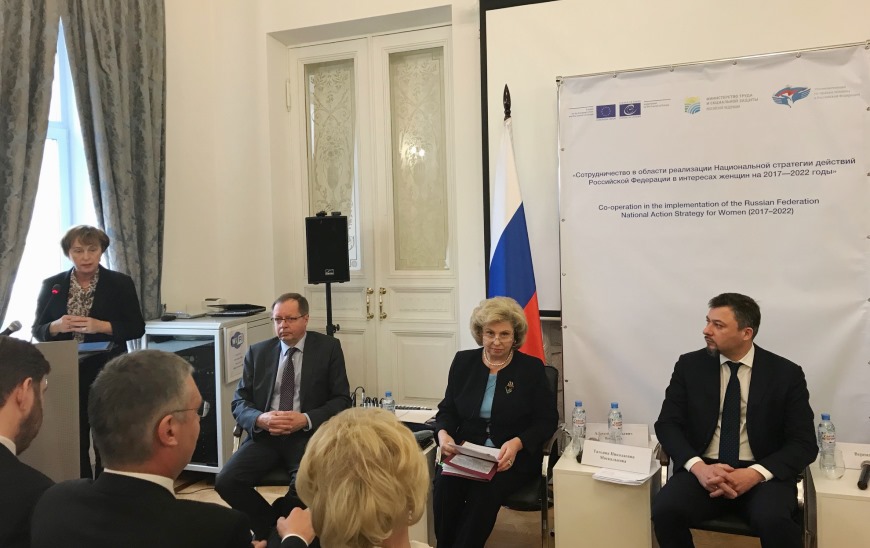 The project will be focused on developing knowledge and skills in two areas of the Russian National Action Strategy for Women (2017–2022):

1) preventing social disadvantage of women and violence against women and

The ceremony was opened by Verena Taylor, Director of the Office of the Council of Europe Directorate General of Programmes. Welcome speeches were given by Tatiana Moskalkova, the High Commissioner for Human Rights of the Russian Federation, Alexey Vovchenko, the First Deputy Minister of Labour and Social Protection of Russian Federation, Andrey Kelin, Director of the Department of European Co-operation of the Ministry of Foreign Affairs of Russian Federation, Claudia Luciani, Director of Human Dignity, Equality and Governance, Council of Europe, and Mara Marinaki, European Union Ambassador and the European External Action Service Principal Adviser on Gender and on the implementation of UN Security Council Resolution 1325 on Women, Peace and Security.

Press briefing by the key speakers took place after the launch ceremony.

The official opening was followed by an international expert workshop “Violence against women: causes, prevention and ways of overcoming”. The workshop was designed to share promising experiences in combating this global scourge and to raise awareness about applicable standards related to prevention of violence against women and protection of victims. Council of Europe Human Rights Commissioner Dunja Mijatović addressed the participants of the workshop via video message.