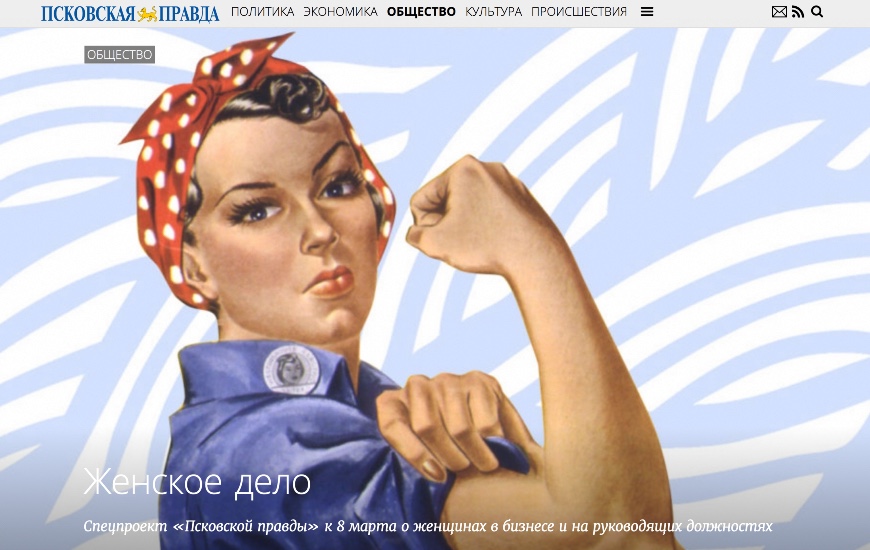 A total of 184 works was received by the “Journalist” magazine for competing in two categories: “The Best Article on the Participation of Women in Public and Political Life” and “The Best Visual Campaign: Social Advertising on Violence Against Women (video / social poster)". Applications were received from many regions of the Russian Federation: Moscow, St.Petersbourg, Kaliningrad, Makhachkala, Yamalo-Nenets Autonomous Okrug, Yakutia, etc.

The competition jury consisted of the project partners. According to their decision the special project “Women's Business” of the “Pskov Pravda” newspaper was awarded with the first prize in the Nomination for The Best Article. This work was prized for the depth of understanding and original presentation of materials about women in political and public life of the region and the country. Fragments of this project are published in the May issue of the “Journalist” magazine, and the full material is available on its website.

The second prize in the Nomination for The Best Article was awarded to the interview of Alexandra Melnik with Oksana Pushkina, the deputy of the State Duma, “I have to prove step by step” in the newspaper “Economics Today”. This work was noted for its accents and a positive and convincing image of a modern woman politician created.

The third prize was awarded to the “Kazan Vedomosti” newspaper, noted for its consistent coverage of women's participation in public and political life and for drawing attention to women of Tatarstan who succeeded in politics, business and social activities.

The first prize in the Nomination for “The Best Visual Campaign: Social Advertising on Violence Against Women” was awarded to the video “In the apartment” by Anastasia Kalachikova, Ksenia Burakova and Elena Volgina for vivid realization and creativity.

The second prize was awarded to the video “Protect your loved ones!” by Tatyana Nigolyuk, noted for its interesting idea and its extraordinary implementation.

And the third prize was awarded to the video project “You Are Not Alone. Pauline" by Ksenia Baskakova, noted for its brightness, expressiveness, emotionality, clear and convincing message.

A special mention has been awarded to the theatre performance “We are Against Violence” of the youth creative project “Golden Sechenije” in Tomsk.

All prize-winning articles and videos can be found on the “Journalist” website.

The project expresses gratitude to all participants of the media competition and wishes them further success.