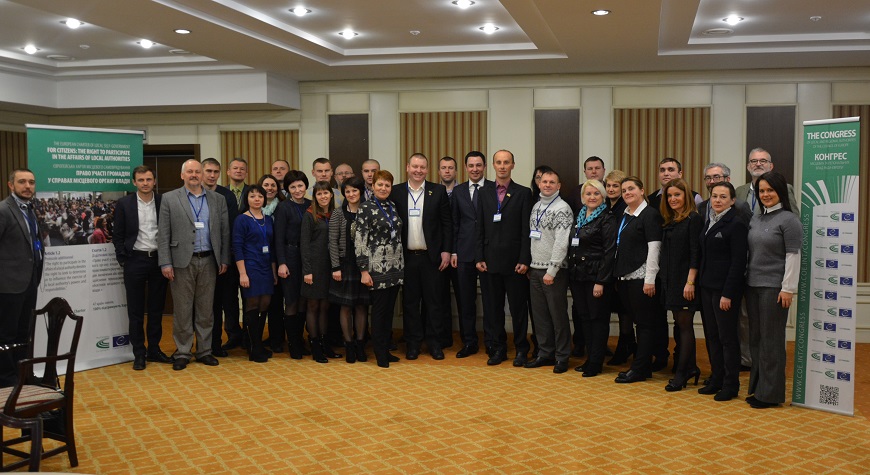 6-8 December 2016 – Kyiv (Ukraine) – 25 Ukrainian local councillors, mostly in  their first electoral mandate, met in Kyiv to discuss the implementation of the principles of the European Charter on Self-Government in Ukraine, to improve their understanding of the local democracy tools and mechanisms. They strongly expressed their will to change the traditional mindset for a modern democratic behaviour. This expectation for change was supported by Congress Member Andrew Boff (United Kingdom, ECR): “You have the power to change. You are not alone. It is the power of councillors to ask questions to executive authorities”. The seminar also enjoyed the participation of Volodymyr Prokopiv (Ukraine, EPP) Head of the Ukrainian delegation to the Congress of local and regional authorities and Congress Member Pikria Avaliani (Georgia, SOC). Participants exchanged on good practices to promote citizens’ participation, ethical decision-making, their roles and responsibilities within the current trend of decentralisation reforms in the country with experts and peers from Georgia, Switzerland, the United Kingdom and Ukraine.

Participants from Rivne, Sumy, Volyn, Chernihiv regions had also the opportunity to discuss the practices of Kyiv and Lutsk city in introducing participatory budgeting and in dealing with the issue of conflict of interest. The Ukrainian Councillors developed further ideas for next steps which will allow them to improve the situation in their communities.

The workshop “Local Councillors: everyday actors of local democracy” was organised in the framework of the Project “Promoting local democracy in Ukraine”, which is part of the Council of Europe Action Plan for Ukraine 2015-2017.

Ukraine joined the Council of Europe on 9 November 1995, ratified the European Charter of Local Self-Government on 11 September 1997 and its Additional Protocol on the right to participate in the affairs of a local authority on 2 September 2014. Countries which have ratified the Charter are bound by its provisions. The Charter imposes compliance with a minimum number of rights and principles, which are the European bedrock of local self-government. The Congress of Local and Regional Authorities of the Council of Europe ensures respect for these principles.

Marité Moras, Head of the Co-operation Activities Unit, Congress of Local and Regional Authorities of the Council of Europe, Tel: +33 3 88 41 22 33

The project “Promoting local democracy in Ukraine” is carried out by the Congress of Local and Regional authorities of the Council of Europe as part of the Action Plan for Ukraine 2015-2017.

It aims to improve the implementation of democratic principles in Ukraine, by enhancing the institutional and leadership capacities of local elected authorities and disseminating best practices in local democracy nation-wide.

The intervention of the Congress is based on Recommendation 348(2013) on local and regional democracy in Ukraine, further complemented by a post-monitoring programme which successfully led to the joint signature of a roadmap with national authorities in May 2015, setting out a timeline for the implementation of reforms.

Throughout the project life-cycle, the following outcomes are expected to be reached: 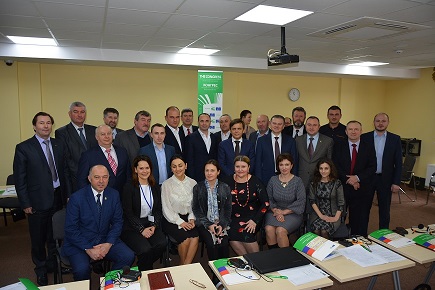 The aim of the workshops “Mayors, leaders for change” is to provide the participants with the opportunity to exchange experience with Ukrainian and other European peers on local governments’ challenges and in particular on ways to define and lead successful policies, plan strategically, inspire and involve citizens and stakeholders in a positive and effective manner. 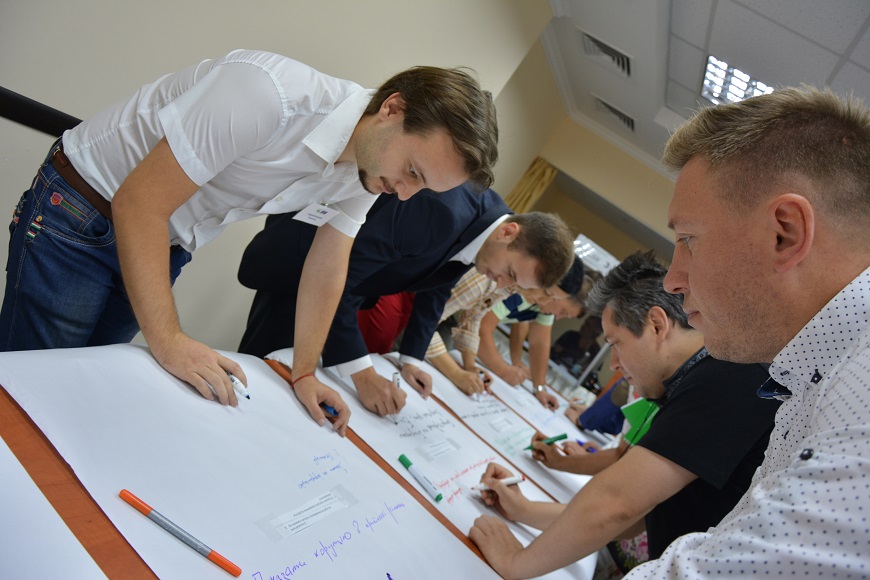 The aim of the workshops “City councillor: an everyday actor of local democracy” is to increase the knowledge of local democracy standards, to ensure effective and legal governance within local councils in the public interest, and to support the definition and implementation of successful policies in local communities while inspiring and involving citizens and stakeholders in a positive and effective manner. 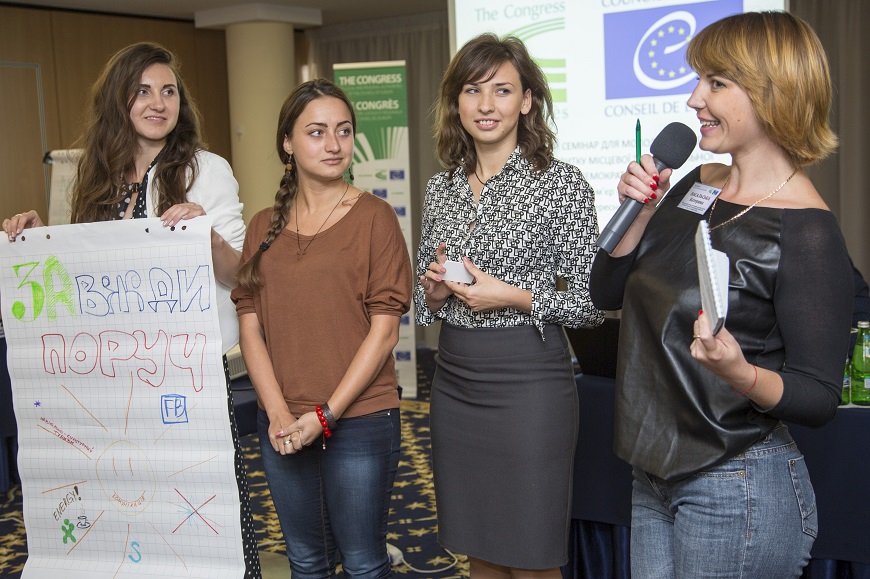 The aim of the regional seminars for young local leaders on local and regional democracy is to spread a culture of democracy by raising the awareness of young community leaders on local and regional democracy principles and developing their capacity to engage in local elections in an active and qualified manner. It is intended to generate a spirit of co-operation among a selected group of young people, and - through an exchange of experience which involves members of the Congress and experts - to create an environment where participants feel free to discuss their personal experience and share their perception of the role of local authorities and of citizens.

One of the goals of the project is to establish commonly agreed mechanisms and processes promoting effective coordination and cooperation between different levels of local self-governments, national associations and central authorities in implementing local self-government reforms. It also promotes exchanges of best practices between the representatives of the project’s target groups: young local leaders, mayors and councillors and their peers from other member countries of the Council of Europe.

Links to publications about activities Further to the invitation by the Ukrainian authorities, the Congress deployed an enlarged delegation – including 28 members from the Congress itself, 11 from the Parliamentary Assembly and four from the EU Committee of the Regions – to observe the local elections held on 25 October 2015. From 1 to 3 October 2015 a pre-election visit was organised in Kyiv. On Election Day, 24 Congress’ teams, involving in total 56 observers from 25 European countries, monitored the procedures in some 240 polling stations, aimed at electing Heads, Mayors and Councils at different levels of territorial government. The entire Congress mission was closely co-ordinated with other international organisations, notably OSCE/ODIHR and the observers from the European Parliament

On the whole, the voting and counting processes on E-Day were competitive, well organised and transparent in most of the country and the campaign, in general, showed respect for the democratic process.

Nevertheless, there is a continued need for reform, in particular, due to different factors:

The Congress of Local and Regional Authorities, within the project “Promoting local democracy in Ukraine”, launched a call for proposals for participants involved in the activities for Mayors as leaders for change.

Five local initiatives on transparency and citizen participation were selected for funding, expert support and peer reviews. The selected local authorities will aim to make their governance more open, inclusive, responsive, transparent and accountable to citizens, whilst ensuring that gender perspective is taken into account. 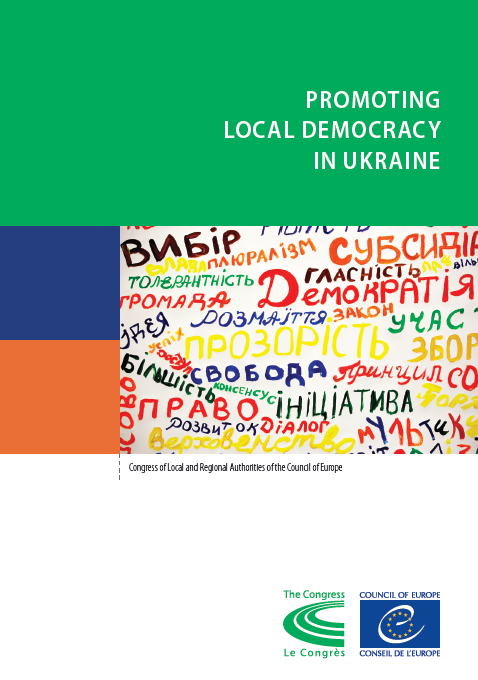