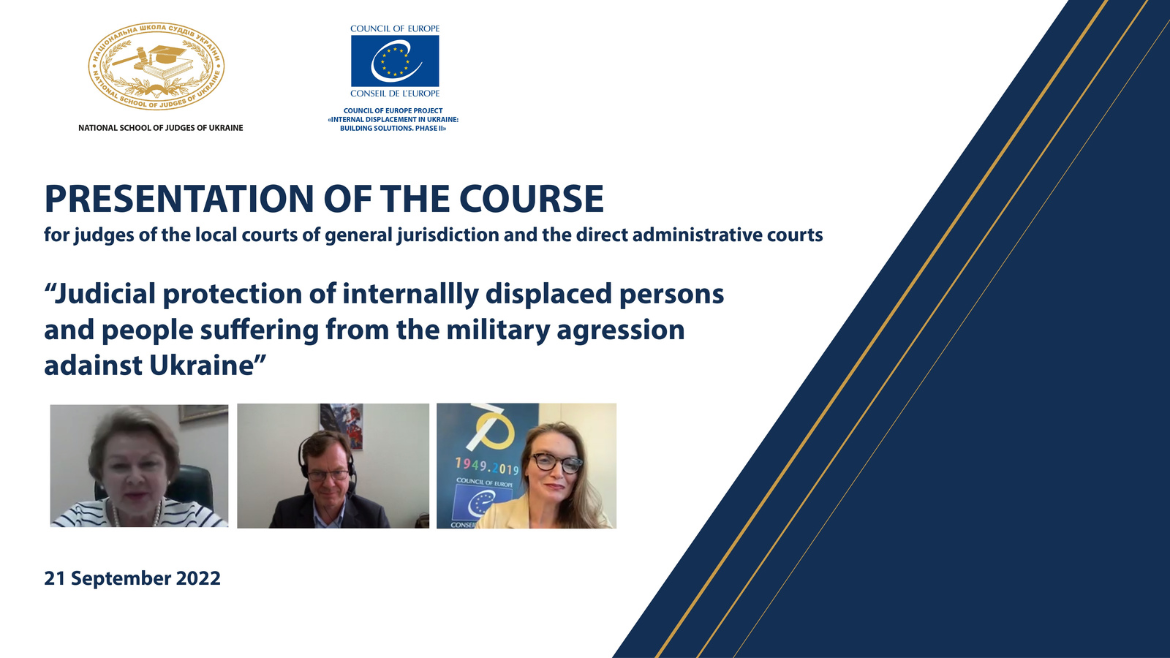 The Council of Europe Project "Internal Displacement in Ukraine: Building Solutions. Phase II" (the Project) and the National School of Judges of Ukraine (the NSJU) presented the course on judicial protection of the rights of IDPs and persons suffering from the military aggression against Ukraine. The course was developed and launched for judges of the local courts of general jurisdiction and the district administrative courts.

In the opening remarks Mr Steen Norlov, Head of the Council of Europe Office in Ukraine, expressed the admiration to Ukrainian judiciary and legal community, who continue their operation under the current very difficult circumstances caused by the war against Ukraine.

“We consider the fact that the Council of Europe is present in Ukraine and implementing projects as a very visible way of standing by Ukraine. The Organisation is now supporting Ukraine through the adjusted Council of Europe Action Plan for Ukraine 2018-2022 adopted by the Committee of Ministers in May 2022. Among its key priorities it is a support to the National School of Judges of Ukraine, lawyers and other relevant professionals assisting displaced persons and conflict-affected people in protecting their rights and accessing information needed for informed decision making” – said Mr Steen Norlov.

Mrs Natalia Shuklina, Acting Rector of the National School of Judges of Ukraine, Honored Lawyer of Ukraine, thanked the Project for fruitful long-term cooperation and appreciated the efforts of the authors who developed the course on judicial protection of the rights of IDPs and the war-affected people in an extremely short time, due to its urgent need and relevance. Prof. Shuklina emphasized that this course will be introduced to the NSJU training and professional development program for judges for 2023.

“Nowadays and many years ahead millions of people suffering from the military aggression against Ukraine will be seeking for redress and effective legal remedies to protect and renovate their fundamental human rights and dignity. Any person concerned may refer to the European Court of Human Rights, individually or through joint legal action, any alleged breach of the Convention and its protocols by the Russian Federation occurred until 16 September 2022, when Russia ceased to be a Party to the European Convention on Human Rights. However, under current conditions it’s the first and foremost for national courts to ensure effective timely protection and restoration of the human rights of IDPs and the war-affected people in line with Council of Europe standards” – said Mrs Lilja Gretarsdottir, the Head of the Co-operation Programmes Division, Directorate General Human Rights and Rule of Law ( Council of Europe, Strasbourg).

Mrs Lilja Gretarsdottir concluded that the course will contribute to the advancement of the national courts’ case-law on the human right protection of people suffering from the war in Ukraine in line with Council of Europe standards.

The materials of the course for judges will soon be posted on the NSJU educational platform and the Project page on the website of the Council of Europe Office in Ukraine.

The full version of the presentation of the course for judges is available here: https://vimeo.com/752996612