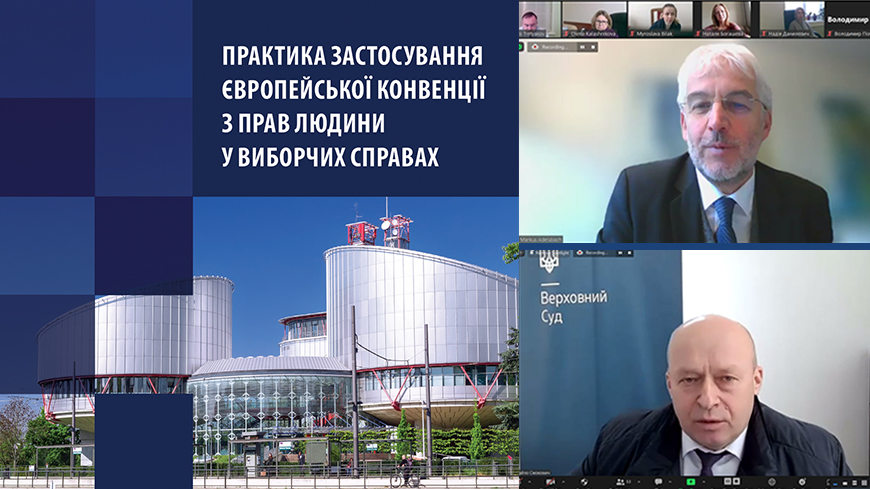 More than 50 judges and representatives of Administrative Cassation Court within the Supreme Court deepened their knowledge on ECtHR case law on electoral matters, as well as learnt about the results of the research on challenges for organisation and holding of elections in Ukraine in post-war period during the thematic online workshop* that took place on 18 November 2022.

When opening the event, Chief Justice of the Administrative Cassation Court within the Supreme Court Mykhailo SMOKOVYCH has noted that publications to be presented during the workshop are highly valuable for the Ukrainian judiciary, academia, state and society in general. He has highlighted that elections are the synonym of peace in the country as the electoral legislation is valid, but not actually applicable during the martial law. Herewith, the martial law will not last forever, and when it is lifted the Electoral Code, adopted in 2019, will obviously be a legal basis for organisation and holding of elections in Ukraine, thereafter, new electoral disputes would surface, and the judiciary should be ready for their proper and timely resolution: “We need to apply all possible efforts, that is actually what we are doing now, not only to rebuild Ukraine, but to make sure that Ukraine stands steady as a strong and democratic state in the European space, and that is impossible to implement without democratic elections”.

Markus ADELSBACH, Head of the Division of Elections and Participatory Democracy of the Council of Europe Directorate General of Democracy and Human Dignity, has stated that sustainable democracy is impossible without free and fair elections: “We need to protect electoral rights. With all the means at our disposal. And the role of courts in this process is extremely important, as the level of citizens’ trust in the election results and the legitimacy of the elected authorities also depend on the quality of court decisions”. Mr Adelsbach has also noted that a new Action Plan for Ukraine “Resilience, Recovery and Reconstruction” for 2023 – 2026 is currently being developed, and made emphasis on the Council of Europe unwavering support for Ukraine and the readiness of the Organisation to continue providing any further necessary assistance in improving electoral legislation and practice in Ukraine.

Thus, during the event, an overview of 12 decisions and respective case law regarding application of the European Convention on Human Rights was presented. Full texts of the decisions translated into Ukrainian are available in the Compendium “ECHR case law on electoral matters. Selected decisions”**. The overview has been made by Dmytro TRETYAKOV, lawyer at the Registry of the European Court of Human Rights, who has underlined the importance of the mentioned publication, as it covers different angles of electoral process from the perspective of rights guaranteed by the European Convention on Human Rights, as well as gives access for Ukrainian professionals to the ECtHR decisions that are available only in French and/or English and are not widely known among Ukrainian audience. 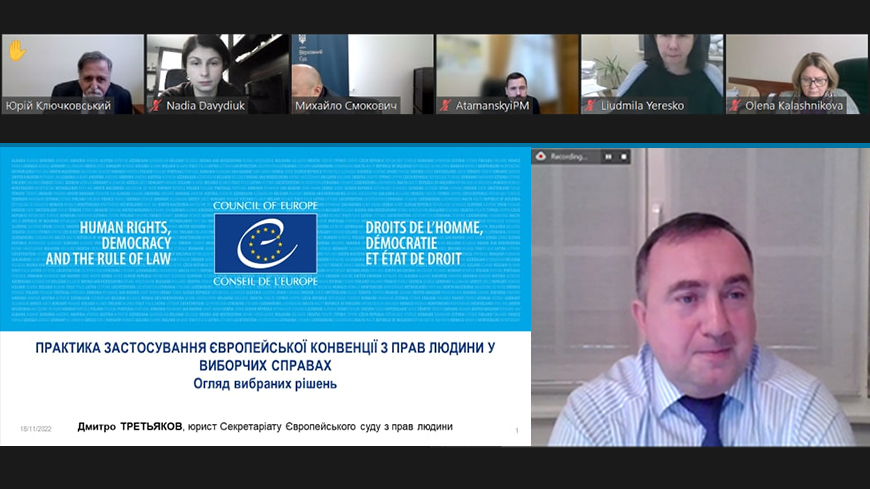 Second part of the online workshop was dedicated to the presentation and discussion of the results of the needs assessment report “Organisation and Holding of Elections in Post-War Ukraine. Prerequisites and Challenges”, conducted by the Council of Europe in summer 2022***. The mentioned study was performed in connection with the full-scale military aggression of the Russian Federation against Ukraine and the series of problems and threats that it caused to the functioning of democratic institutions in Ukraine. The research has been presented by its authors – Council of Europe national consultants Yurii KLIUCHKOVSKYI and Volodymyr VENHER, who have noted that the issue of calling, organising and holding of elections in the post-war period requires gradual and systematic preparation already at present stage due to huge number of internally displaced persons, large-scale occupation of Ukrainian territories, powerful propaganda and smear campaign against Ukraine and other severe challenges whereas the ways to overcome them require in-depth systemic analysis and comprehensive approach. 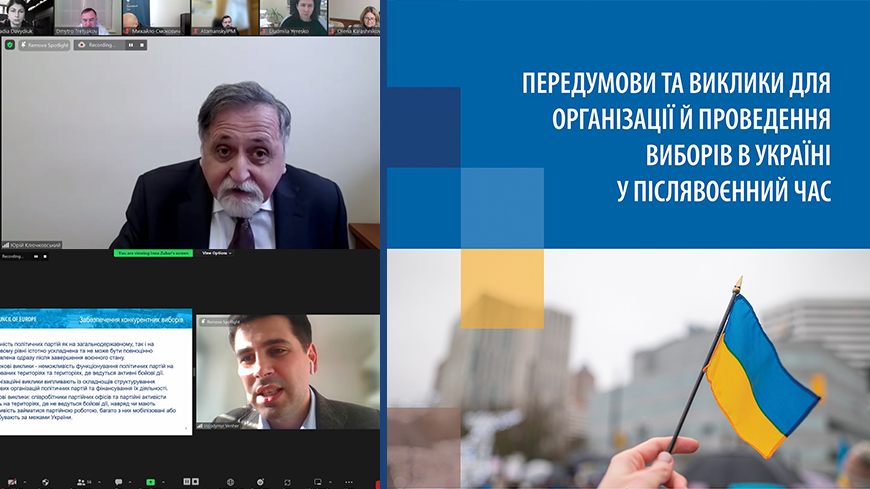 During the general discussion the participants expressed their gratitude to the Council of Europe for constant attention and support, as well as motivation and drive for victory and further reconstruction of Ukraine despite all the challenges caused by the war, in particular, in the electoral domain.

*Online workshop “European Court of Human Rights case law on electoral matters. European electoral standards and post-war challenges for elections in Ukraine” was organised by the Administrative Cassation Court within the Supreme Court in cooperation and with the support of Council of Europe project “Supporting the transparency, inclusiveness and integrity of electoral practice in Ukraine” (Phase III), implemented within the Council of Europe Action Plan for Ukraine 2018 – 2022.

**Compendium was developed with the support of Council of Europe project “Supporting the transparency, inclusiveness and integrity of electoral practice in Ukraine” (Phase II), implemented within the Council of Europe Action Plan for Ukraine 2018 – 2022.

***Needs assessment research was conducted with the support of Council of Europe project “Supporting the transparency, inclusiveness and integrity of electoral practice in Ukraine” (Phase III), implemented within the Council of Europe Action Plan for Ukraine 2018 – 2022.