The City of Reggio Emilia struggling with the Coronavirus health emergency 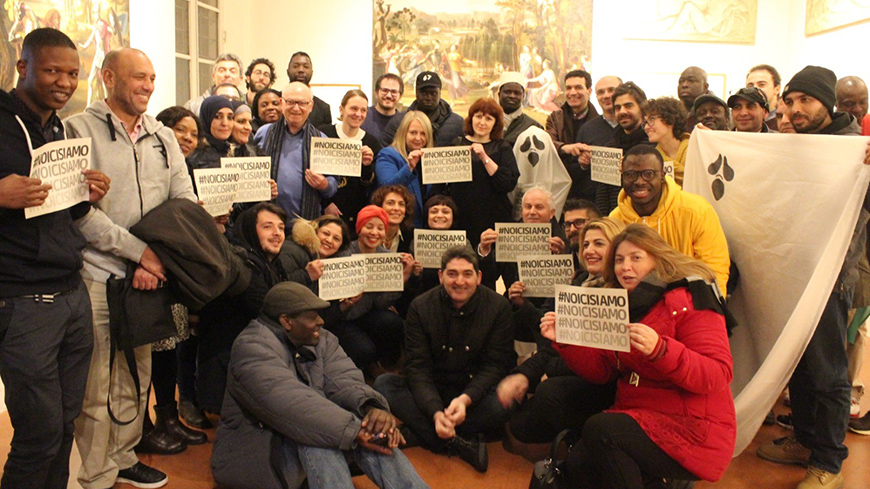 Alongside the dramatic realities tied to the Coronavirus health emergency, stories of solidarity and a sense of belonging are also emerging. Associations and groups of people are sharing stories of a city capable of facing and dealing with these difficult weeks through small actions that restore a great sense of community.

The City of Reggio Emilia confirms to be the City of the People, with its institutions working side by side with the local civil society, and so able together to mobilise a whole community.

“In this situation where the numbers of infection and deaths are likely to overwhelm us,” emphasises the Deputy Mayor Daniele Marchi, “it is important also to share the efforts and dedication of those who persevere, even at significant personal and economic costs, in sending a message of belonging and commitment to their own community.”

“Alongside the bodies, associations and enterprises that have traditionally always participated in the social and economic well-being of the area,” adds the Deputy Mayor Marchi, “I would like to underscore how the intercultural world -- composed of community associations present in the area, of groups of citizens from a migrant background and how places of worship -- are offering a true and real example of social cohesion and sense of belonging to the territory and its institutions.”

Local institutions and the Ausl of Reggio Emilia (the local public health administration), through the Mondinsieme Foundation, have begun working on the Coronavirus emergency since the emergence of the first cases in the Codogno territory. Reggio Emilia, in fact, was the first Italian city to produce multi-lingual informative and educational materials in order to provide citizens of different backgrounds with the necessary directives. The local administration -- as well as the Ausl and the Province -- have in fact published all the information in twelve different languages (> some examples).

The thirty member associations of the Mondinsieme Foundation collaborated in the translation of the texts and promoted and aided in the dissemination of the informative material in order to protect the health of their communities by ensuring that the new rules regarding health were understood and spread within the communities. There are many associations, places of worship, and groups of citizens who have made a contribution by undertaking various actions of solidarity.

Despite this action was soon replicated by other Italian cities, a distinctive feature that still today characterises the City of Reggio Emilia is the daily communications held by Mondinsieme with its member associations via a WAPP group.

As emerged several times, the Chinese community associations in the Reggio Emilia area have been particularly active: they have held fundraisers of over 70 000 euros, distributed thousands of sanitary materials (masks, protective suits, etc.) through the following organisations: Ausl, local authorities, Dar Voce, Caritas, Italian Red Cross and the Civil Protection.

Of particular relevance are also the actions of solidarity and food distribution by different spaces of worship. The Islamic Centers in the area joined forces and donated 50 000 thousand euros to health-care services. Some of the religious centers also carried out actions distributing masks and other health-care materials to health facilities outside of their provincial context, such as to Codogno at the beginning of the outbreak. At the local level, the Islamic centers have done grocery shopping and distributed food among the families of elderly and promoted the “Spesa sospesa - Suspended spending” for those who are facing more hardship in this period.

The donations to health and assistance services are only some examples of solidarity. The Albanian association Shqiponja has promoted to their members opportunities for participation and volunteering in support of the emergency, in particular in collaboration with Dar Voce and Caritas (e.g. for home assistance) and with Avis for blood donation. The Tamil association has shared an online portal in the Tamil language (www.tamilinfopoint.it) to inform families of the rules, regulations and actions taken by the government, the Emilia-Romagna Region and the Municipality of Reggio Emilia during the emergency. In addition, many of the representatives of the community have recorded videos in their mother tongue to give more detailed and culturally specific information on new health and social behavior specifics. Also of note, the Nigerian Christian community donated food products to the Red Cross in order to distribute food to the most needy.

“Fundraising and other actions of solidarity,” Marchi concludes, “are tangible proof of the ties and the sense of belonging to the city of Reggio Emilia. It is a proof of citizenship that goes beyond any piece of paper and that must take into account how these associations are also engaged in supporting their families in their communities of origin, in particular the most fragile. In addition to relatives in the countries of origin, many countries in the last two weeks -- I think in particular Africa -- have seen the virus arrive and have seen the closing of their borders rendering even weaker economies even more fragile than ours.”

In addition to these emergency actions, the Mondinsieme Foundation also kept working on answering a more relational need. It is, in fact, important to remember that in this peculiar situation people suffer from a strong isolation. They cannot enjoy the opportunity of gathering together and nourishing the social ties (included those that Mondinsieme has been facilitating over the years). Two initiatives can be mentioned: the first one is called #NOICISIAMO 21 MARZO CONTRO LE DISCRIMINAZIONI 2020 (#WeAreThere: 21 March against discrimination 2020), as in invitation to share personal stories on Facebook during this time of isolation (ideated to celebrate the International Day for the Elimination of Racial Discrimination, the slogan used to invite people to participate is: “let’s stay united against all forms of discrimination, while jointly discriminating the coronavirus”; > for more information). The second initiative is the virtual transposition of the monthly dinners, organised by Mondinsieme within the project “Guess who is coming to dinner”. Part of a national project developed by the Italian Network of Popular Knowledge, once a month Mondinsieme matches families with different cultural backgrounds (who didn’t know before) for dinners in their private houses. The initiative aims at breaking down cultural barriers and to create new relationships while enjoying a warm and convivial atmosphere. The Coronavirus health emergency obliged to suspend the dinners, but instead of interrupting the project, people were given the chance to send video of them cooking (together with receipts), and also to share dinners through video conference applications. (here an example - in Italian)