Statement by the Standing Committee of the Conference of INGOs 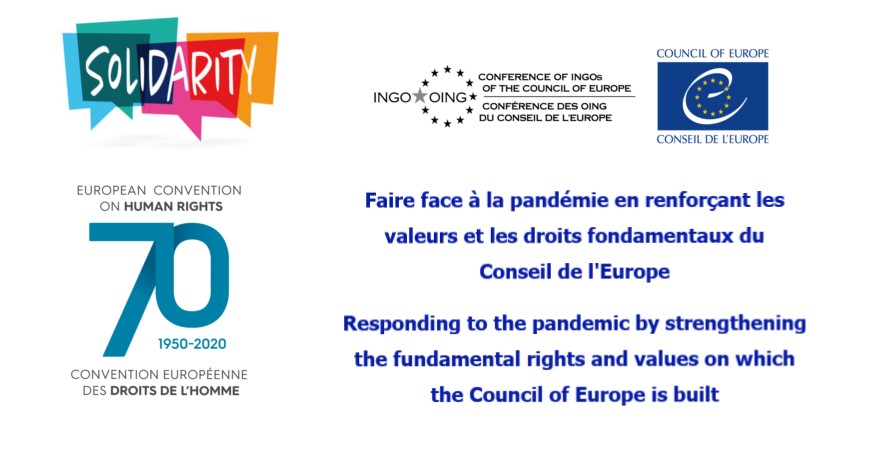 In the context of the fight against the pandemic, the Standing Committee of the Conference of INGOs is expressing its strong commitment to the construction of a diverse and open society, based on human rights, the rule of law and meaningful democratic participation.

In the name of solidarity, hundreds of millions of the persons respect the confinement, imposed and self-imposed in many Council of Europe member States.

Europe "will be built through concrete achievements which first create a de facto solidarity". On a European scale, this quote from Robert Schuman must inspire European leaders today, in order to put in place, as of now, extraordinary measures to guarantee protection and access to health care for all, to preserve dignity and human rights

Where there are gaps in actions undertaken by public authorities – for whatever reason – citizen and NGO initiatives supporting the most vulnerable are taking place. NGOs prove to be the linking pin between an overcharged government and the society. The courage of those who act on the front lines strengthens social cohesion among all components of society.

The balance between the heteronomy of the law and the autonomy of the individual must be preserved. More than ever, digital civic space constitutes a tool for citizen self-organization and space for creativity and democratic innovation. The freedom of expression must be guaranteed there, also in order to denounce any abuse of power that goes against fundamental rights.

NGOs fulfil a fundamental role in checking the emergency measures for necessity and proportionality, because any intervention by the State in individual rights and freedoms must be proportional, contextualized and limited in time[1].. Strong guarantees of the rule of law are necessary to increase citizen trust in public life. The demands and expectations of citizens relating to the exercise of public ethics[2] are legitimate and oblige decision makers to guarantee citizen’s right to information, according to standards established by the Council of Europe[3]. In light of the experience of the current emergency context, we call on all member States to ratify the Council of Europe Convention on Access to Official Documents (CETS n°205).

Through this declaration, the Conference of INGOs calls for the strengthening of the collective commitment of all stakeholders around the values of solidarity that were at the core of the founding of the Council of Europe 70 years ago.