Journalists at risk speak out on undue pressure in new study 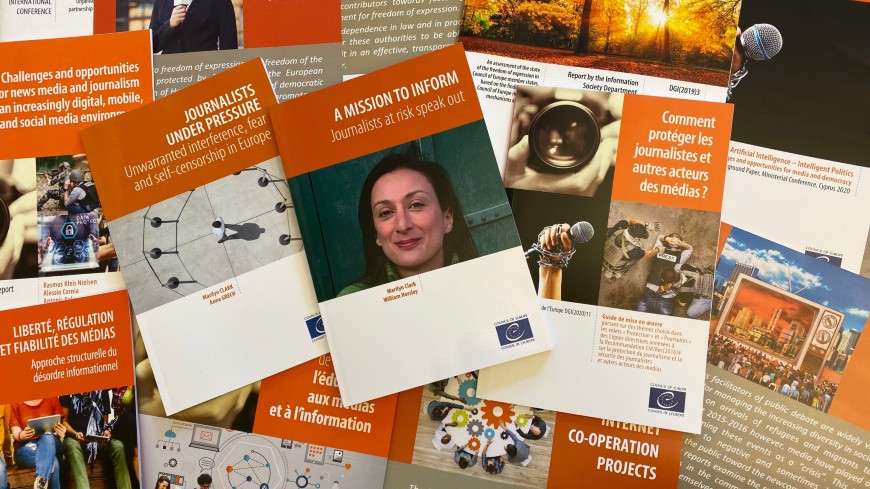 The study is based on in-depth interviews with 20 journalists, including Daphne Caruana Galizia

Strasbourg, 14.10.2020 – A study published today by the Council of Europe makes an in-depth analysis of undue pressure exerted against journalists to prevent them from reporting freely and of the strategies they use to overcome fear and continue to perform their public watchdog mission.

The study “A Mission to Inform: Journalists at Risk Speak Out”, authored by two Council of Europe experts on media freedom, Marilyn Clark and William Horsley, is based on interviews with 20 journalists from 18 countries who have suffered different kinds of violence and intimidation. One of the journalists, Daphne Caruana Galizia, was interviewed ten days before 16 October 2017, when she was killed, almost three years ago.

The study calls for effective measures to protect the safety of journalists at risk, prosecute the perpetrators of attacks and create a favourable environment for free, independent and diverse media, in line with Council of Europe’s recommendations. Recommended measures include legal and regulatory reforms, improved reporting mechanisms to protect against threats, public media literacy programmes and support to journalists via professional training and psychosocial support.

Whilst this sample of 20 interviews cannot be considered representative of the general situation in Council of Europe member States due to its focus on individual cases, the authors underline that it allows to develop a socio-psychological interpretation of the complexity of journalists’ experience of dealing with high levels of intimidation or threat.

The aim of this qualitative research is to exemplify and enable better understanding of different forms of interference with press freedom already identified in a quantitative study published in 2017 based on a survey to 940 journalists from Council of Europe member States and Belarus concerning the risks faced by media and journalists.

In the interviews, the 20 journalists spoke about the risks encountered when exercising their profession, the intrusions and limitations of their private life, the experience of sometimes putting their lives at risk, and about their strategies to build resilience and carry on their “mission to inform”.

The report identifies four types of threats and pressures which the journalists interviewed were subject to by various actors, including state actors and politicians: physical, psychological, judicial or legal, and economic. The study also assesses the way these pressures affect journalists´ work and their chilling effect on freedom of expression, for example, via self-censorship.

Other aspects evaluated are the way in which the legal, political, economic and cultural context in different parts of Europe determines the ability of journalists to do their work, and the strategies that journalists use to continue doing their work despite hostile environments. The report underlines that the journalists interviewed often mention the sense of having a mission as one of the key strategies to overcome the personal and professional challenges they are confronted with.

The study has been published and is available as an ISBN publication at book.coe.int

Promoting a favourable environment for journalists to carry out their work and enhancing their safety is one of the Council of Europe’s priorities. In 2016, the Committee of Ministers adopted a Recommendation to its member states containing a set of guidelines to protect journalism and journalists which was supplemented in 2020 by an Implementation Guide.

Another Council of Europe mechanism to better protect journalists is the Platform to promote the protection of journalism and safety of journalists. Since 2015 this platform promotes cooperation and dialogue between the Organisation, its 47 member states and partner NGOs with regard to specific threats to media freedom.

The survey Journalists under Pressure: Unwanted interference, Fear and Self-Censorship in Europe, published in 2017, showed that journalists in Europe are often exposed to serious unwarranted interference in their work, including intimidation and violence. Almost one third of the journalists who participated in the survey had experienced physical assault in the last three years.