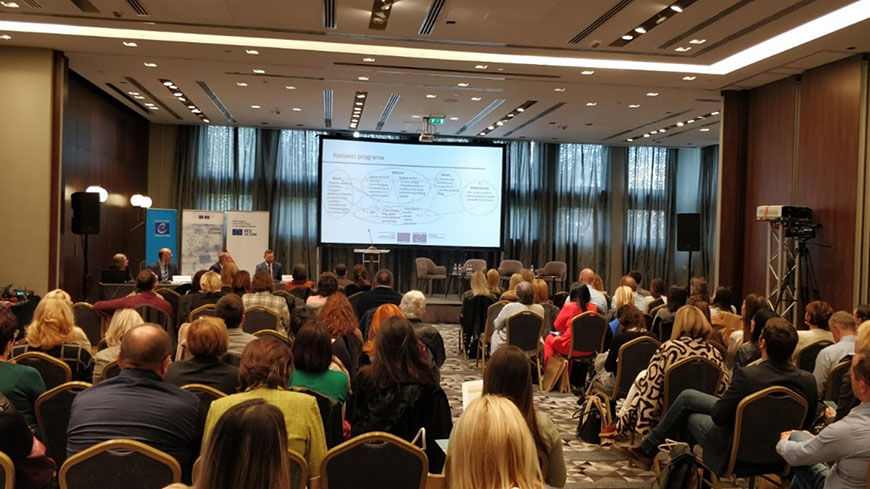 Strong human resources management and professional development systems at local level form the backbone of a successful public administration, which in turn is crucial to ensure good democratic governance within Council of Europe member States. Furthermore, citizens increasingly expect local self-governments to be capable of efficiently responding to their demands and delivering them services in line with the 12 Principles of Good Democratic Governance.

The Joint European Union – Council of Europe Programme “Human Resources Management in Local Self-Government – phase 2” played a key role in supporting the ongoing effort of the Republic of Serbia in this direction.

On 17 November 2022, the Programme celebrated its Final Conference, providing an opportunity to take stock of the main achievements and to assess the lessons learned and the best practices developed.

Tobias Flessenkemper, Head of the Council of Europe Office in Belgrade, emphasised the importance of the Programme not only to strengthen administrative procedures of local self-governments but also to reinforce the democratic culture in Serbia, stressing that a true democratic environment is really developed only by starting from the local level.

According to Alina Tatarenko, Head of the Democratic Governance Division of the Council of Europe, the project contributed to the modernisation of public administration in the country, bringing it closer to European standards.

“In order to have a strong public administration at local level, we need strong and qualified people working within local self-governments, and the project addressed exactly this element”, stated Martin Klaucke, Head of Operation II at the Delegation of the European Union to the Republic of Serbia.

Maja Mačužić Puzić, State Secretary of the Ministry of Public Administration and Local Self-Government, Dejan Miletić, Director of the National Academy for Public Administration, and Nikola Tarbuk, Secretary General of the Standing Conference of Towns and Municipalities, expressed their satisfaction with the Programme’s results and the importance of the successful partnership established among the different stakeholders involved in securing them. The State Secretary, in particular, made clear that strengthening of public administration at the local level remains one of the key priorities of the Serbian government.

All partners agreed that further support will be needed in order to secure the full implementation of the policies developed and allow all local self-governments in Serbia to align their work with the best European practices.

Highlights from the programme

The Joint European Union – Council of Europe Programme “Human Resources Management in Local Self-Government – phase 2” was implemented by the Centre of Expertise for Good Governance in cooperation with the Standing Conference of Towns and Municipalities. Building on the work undertaken through the first phase, and running from 2018 to 2022, the Programme provided policy and legal advice to the Ministry of Public Administration and Local Self-Government leading to important legislative reforms, including the introduction of the first ever competencies framework system for local government employees.

In addition, the Programme organised roundtables and prepared analyses and recommendations to strengthen the professional development system in the country, developing 4 Sectoral Continual Professional Development Programmes.

Support was provided to the National Academy for Public Administration in developing methodologies for monitoring and evaluation, in particular to assess trainers’ performance and competencies development, as well as for the accreditation of coaches and mentors. A Peer Review was also conducted in order to support the National Academy in analysing the current framework, exchange views with representatives from other European countries and provide recommendations on how to improve.

The Programme also ensured direct assistance to local self-governments, through trainings as well as the provision of municipal support packages and grants in order to develop and implement their professional development programmes.

Over 160 capacity-building activities were carried out by the Council of Europe, involving more than 2700 participants. As a result, the performance index in the field of human resources management in the 50 local self-governments involved increased by 20 percent, in comparison with the period before the Programme started.