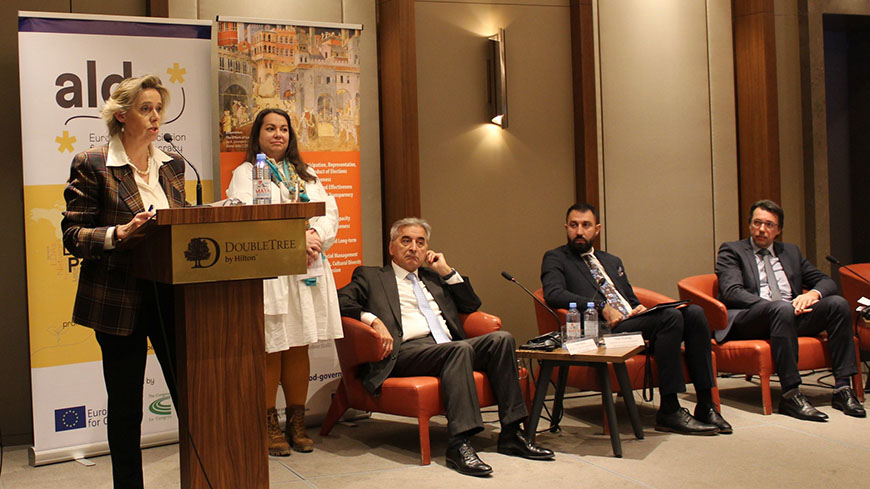 At an award ceremony in Skopje, North Macedonia, Mr Risto Penov, Minister of Local Self- Government of North Macedonia, welcomed representatives from municipalities in Croatia, Kosovo*, and his own state and acknowledged that the opportunity to share experience and learn from each other was an added value of the ELoGE process.

Mr Elbert Krasniqi, Minister of Local Government Administration of Kosovo*, recognised that measuring the performance of municipalities in an open and transparent way is key to building the trust of citizens. ELoGE has served as a diagnostic tool for municipalities and has stimulated discussions about possible improvements.

The European Association for Local Democracy (ALDA) was accredited by the Council of Europe to deliver ELoGE in in Croatia, Kosovo* and North Macedonia. Following a series of capacity-building and awareness raising activities across the region, three municipalities from Croatia, six from Kosovo* and nine from North Macedonia received the ELoGE award, a crystal dodecahedron engraved with the 12 Principles of Good Democratic Governance, as a recognition for the high level of performance that they have demonstrated, in in respect of the 12 Principles of Good Democratic Governance.

The President of ALDA, Mr Oriano Otočan, noted that increased awareness of the 12 Principles of Good Democratic Governance by Croatian municipalities is contributing to improved transparency and increased civil participation in local affairs in his home state.

“Applying for ELoGE serves as motivation for improving governance practice and engaging with citizens”, acknowledged one of the Mayors accepting the award. Other representatives, attested to merits of the ELoGE process as a tool for building trust, promoting transparency, and ensuring accountability.

“ELoGE is an opportunity for municipalities to look in the mirror and challenge themselves to identify areas for improvement” noted another Mayor. All participants encouraged other local authorities to engage in the process in order to standardise practices and increase coordination between municipalities with the common goal of delivering quality and accessible public services that will benefit all citizens.

The Centre of Expertise for Good Governance has supported accredited organisations in delivering ELoGE awards recently to 22 muncipalities in Bulgaria, seven in Slovakia, two in Turkiye and two in Spain. An award ceremony for Italian municipalities is planned for 2 December 2022.