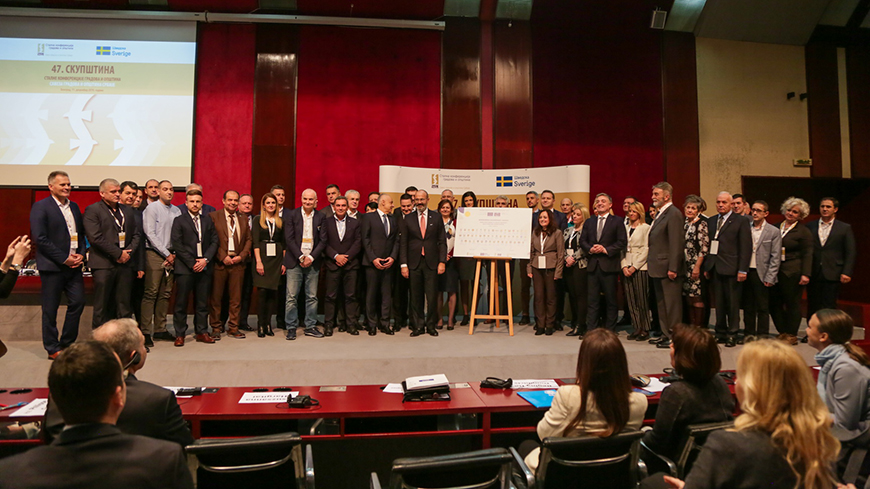 At the occasion of the 47. Yearly Assembly of the Standing Conference of Towns and Municipalities held on 11 December 2019 in Belgrade, the signing ceremony of Memorandum of understanding and cooperation was organised in the framework of the joint programme “Human Resources Management in Local Self-Government – phase 2” funded by the European Union and the Council of Europe and implemented by the Council of Europe in partnership with the Ministry of public Administration and Local Self-Government and the Standing Conference of Towns and Municipalities.

Memoranda were signed by the Minister of Public Administration and Local Self-Government, Mr Branko Ruzic, 50 Mayors/Presidents of Municipalities, and Mr Tobias Flessenkemper, Head of the Council of Europe Office in Belgrade.

representatives were addressed by the Minister Mr Branko Ruzic, the Head of EU Delegation in Serbia, H.E. Mr Sem Fabrizi, and Mr Tobias Flessenkemper, Head of the Council of Europe Office in Belgrade, who all supported public administration reforms made at local level in the field of human resources management and emphasised how important they are for the efficient functioning of local administrations.

Memoranda were signed with the aim of implementing municipal support packages in 50 selected local self-government units, who expressed their readiness to fully commit to the implementation of the support, especially in planning, implementing and monitoring activities enhancing their human resources management system. The singing of memoranda also demonstrates the commitment of all signatories to collaborate and share information, knowledge and experience, with the goal to jointly develop a coherent system of human resources management at central and local level.

The Municipal Support Package is providing EXERT support and expertise in key priority areas of human resources management at local level relevant for the application of the Law on employees in autonomous provinces and local self-governments as well as applicable by-laws in that field. The main objective of the support is to develop a modern public service system based on competences, expertise and know-how in line with European standards and Good Governance principles at local level.