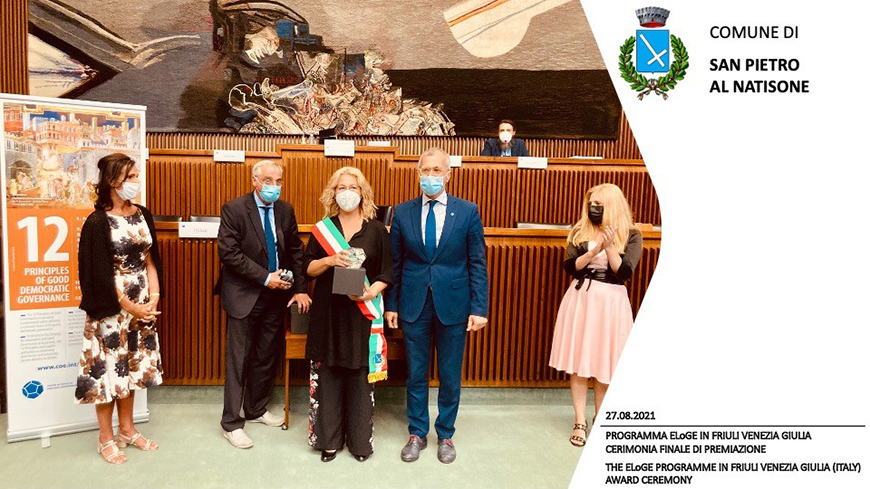 Over the past 10 years, the ELoGE - European Label of Governance Excellence programmes have been promoted and implemented in many Council of Europe member states such as Bulgaria, Norway, France, Ireland, Greece, Lithuania, Romania, Slovakia, Malta, Poland, Portugal, and Spain (Basque Country). In October 2020, it was launched for the first time in Italy, specifically in Friuli Venezia Giulia Region. The programme was implemented by AICCRE FVG, a regional chapter of the Council of European Municipalities and Regions, which is an accredited body for delivering ELoGE in Italy, in collaboration with ISIG - Institute of International Sociology of Gorizia, and the Centre of Expertise for Good Governance.

The ELoGE programme aims to involve local governments and citizens in an assessment exercise to evaluate the compliance of a local authority with the 12 Principles of Good Democratic Governance.

ELoGE was welcomed with great enthusiasm by 20 local administrations in Friuli Venezia Giulia, which have equipped themselves to ensure the full implementation of the Programme, despite the critical issues and problems encountered during the lockdown period.

The ELoGE Award Ceremony, held at the Friuli Venezia Giulia Regional Council headquarters in Trieste was a moment of exchanges on the issues of Good Governance between regional councillors and representatives of local authorities participating in the Programme, as well as an opportunity to stress the added value of the implementation of the ELoGE in the region.

Alina Tatarenko, Head of the Centre of Expertise for Good Governance, focused on the work of the Council of Europe in promoting Good Governance through the ELoGE Programme. The stages of the ELoGE roadmap in Friuli Venezia Giulia Region were presented by Carla Rey, General Secretary of AICCRE Italy and President of the ELoGE National Platform. She also drew comparisons with Solon, a prominent Athenian statesman, who considered good governance as a premise for his reforms.

Finally, the Label was awarded to the 10 Municipalities which were able to demonstrate their respect of the 12 principles:

During the closing, ELoGE FVG has been acknowledged as a valid tool to improve and strengthen the Good Governance of the local administrations in the Region and to encourage the democratic participation of citizens in the public life of municipalities. It has also paved the way to the implementation of ELoGE in all of Italy, which is scheduled to begin already this year.