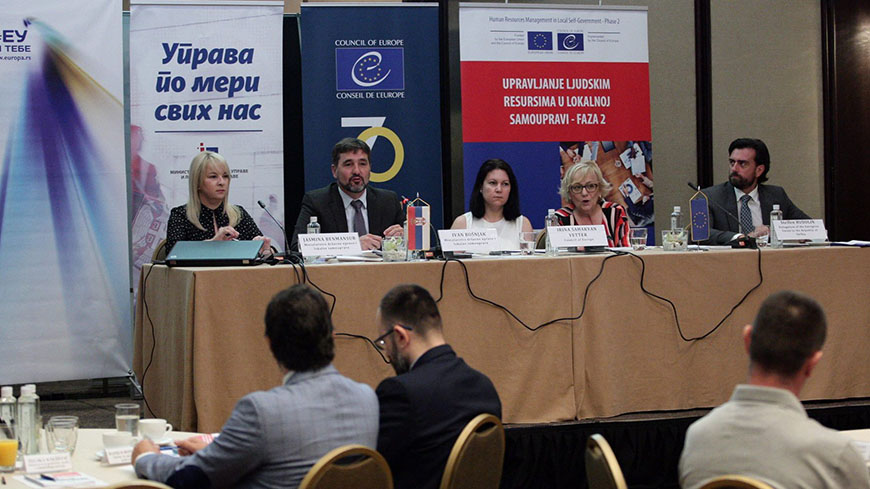 On Friday, 28 June, at Hotel Hyatt, Belgrade, in cooperation with the Ministry for Public Administration and Local Self-government (MPALSG), the Joint Programme of the European Union and the Council of Europe Project “Human Resources Management in Local Self-Government – Phase 2” organised a roundtable with the high level representatives of Serbian line ministries, National Academy for Public Administration, Serbian Government Human Resource Management Service, Standing Conference of Towns and Municipalities and Council for Professional Development of Employees in Local Self-Governments. The main topic of the event was ministries’ support to local self-governments trough professional training programmes in the area of entrusted sectorial responsibilities. The roundtable was organised within Project Activity 2.1.11 “Organisation of annual round tables for representatives of relevant sectors and various ministries, NAPA and CPD, focusing on establishing priority topics and needs for Sector specific training programmes of local public servants, especially those related to the implementation of delegated competencies”.

The main objective of the round table was to discuss with the line ministries (at the level of state secretaries/assistant ministers/ministry secretaries) their legal obligation, in line with the latest amendments to the Law on Employees of Autonomous Provinces and Local Self-governments, to prepare and deliver professional training programmes for employees of local self-governments in the area of delegated competencies (“Sectoral Special Training Programmes”). The broader aim of the event is to support closer cooperation between central and local government levels as part of the overall public administration reform.

The State Secretary of the Ministry of the Public Administration and Local Self-Government, Mr Ivan Bošnjak, Head of Operations II –of the Delegation of the European Union to the Republic of Serbia, Mr Steffan Hudolin, and the Deputy Head of the Council of Europe Office in Belgrade, Ms Irina Sahakyan Vetter, gave opening remarks, highlighting the importance of good human resource management at both central and local government levels as a prerequisite of successful reforms. The opening remarks were followed by presentations of Mr Dražen Maravić, Acting Director of the National Academy for Public Administration and Ms Jasmina Benmansur, Assistant Minister of Public Administration and Local Self-Government, in charge of the Sector for Professional Development, on various aspects related to the strategic and legal framework, as well as identification of training needs, budgeting, development and delivery of Sectoral Special Training Programmes. Subsequent discussion with the participants also included issues related to the accreditation of trainers and existing curricula already provided by various state bodies.