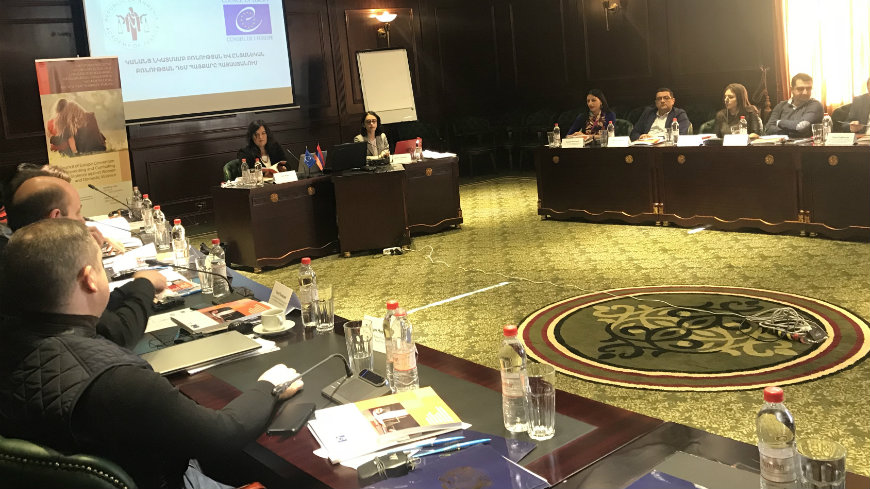 On 10–11 November 2018, the Council of Europe together with the Academy of Justice of the Republic of Armenia conducted a training of trainers on how to prevent violence against women, including domestic violence, protect the victims of violence and hold the perpetrators of violence accountable in line with national and international standards, notably the Council of Europe Convention on Preventing and Combating Violence against Women and Domestic Violence and relevant case law from the European Court of Human Rights.

The training participants included judges, prosecutors and investigators who can teach the course for in-service legal professionals in the Academy of Justice starting in 2019.

“The Academy of Justice has a long-standing successful cooperation with the Council of Europe. The manual developed by the experts for the face-to-face course on preventing and combating violence against women and domestic violence is very comprehensive and addresses all the main issues”, said Anahit Manasyan, the Vice Rector of the Academy of Justice, in her opening speech.

Shushanik Israyelyan, the Deputy Head of the Department of the Oversight of the Legality of Pre-trial Criminal Proceedings of the Prosecutor General’s Office noted: “Given the fact that the legal regulations in this area have been enacted only recently in Armenia and a lot of problems may arise in practice, trainings like these and discussions with representatives from various state bodies is the best way to find solutions to possible problems”.

The training was conducted by Council of Europe experts Lori Mann and Lusine Sargsyan who are the authors of the course curriculum and the training manual
2018-11-19T05:11:00