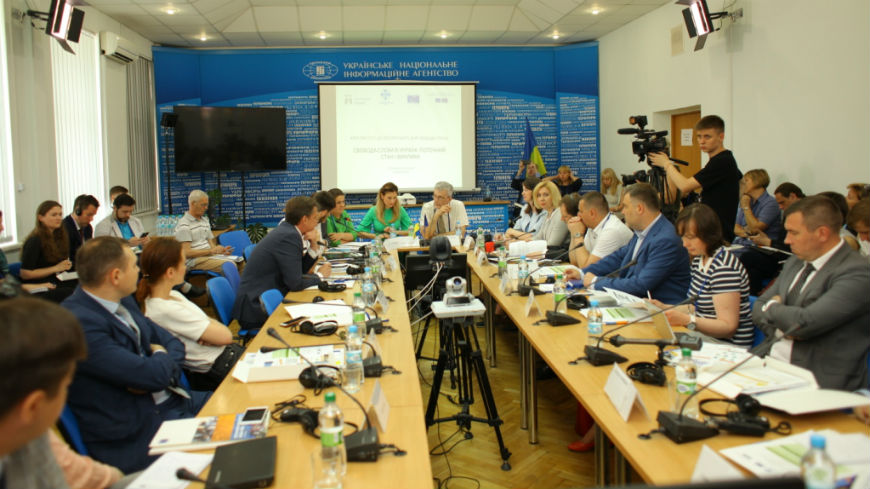 May 3, Kyiv: A round table “Freedom of speech in Ukraine: current status and challenges” was held devoted to the World Press Freedom Day. The discussion was organised by the Information Society Department of the Council of Europe, the Council of Europe and the European Union Partnership for Good Governance jointly with the Ministry of Information Policy and CSO “Institute of Mass Information”.

The goal of the round table was to strengthen the dialogue and cooperation among state authorities, law enforcement agencies, civil society and international organisations for improving the legal protection of journalists, ensuring favourable conditions for journalists' work and aligning Ukrainian legislation to the Council of Europe standards.

Johann Bihr, Head of Eastern Europe and Central Asia Desk of “Reporters Without Borders” presented the ranking of Ukraine in the updated World Press Freedom Index on results of 2017, where Ukraine has risen one step higher up (101 in the 2018 World Press Freedom Index and 102 in 2017). Johann Bihr said that while Ukraine saw fewer abuses in the past year, where it now seems to be stuck in the Index is disappointing after the promises of the 2014 revolution. Also, he presented the Council of Europe Platform to promote the protection of journalism and safety of journalists. Oksana Romanyuk, Executive Director of the NGO "Institute of Mass Information” presented the analytics regarding freedom of speech violations in annual monitoring “Freedom of Press Barometer” carried out by CSO “Institute of Mass Information”.

Galyna Smirnova, Senior Project Officer of the Council of Europe Project “Strengthening freedom of the media and establishing a public broadcasting system in Ukraine” presented the Council of Europe standards, focusing on Recommendation CM/Rec(2016)4 of the Committee of Ministers to member States on the protection of journalism and safety of journalists and other media actors.

Oleksandra Yanovska, Judge of the Grand Chamber of the Supreme Court of Ukraine and in the past - Consultant of the Council of Europe in Ukraine presented the Recommendations of the Council of Europe expertise of the Criminal Code of Ukraine concerning offenses against media professionals carried out in September 2017. The participants discussed possible mechanisms to implement a key recommendation of the expertise - broadening and improving the definition of “professional activities of a journalist” in line with Council of Europe standards and the examples of other countries (e.g. Serbia).